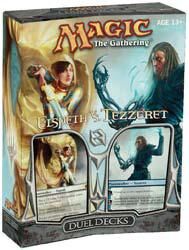 In addition to this, the Duel Deck contains a Magic "learn to play" guide, a strategy inset, and three copies of the

1/1 Soldier creature token, which is created by Elspeth, Knight Errant and Raise the Alarm.

The previous planeswalker-based duel decks (Duel Decks: Jace vs. Chandra and Duel Decks: Garruk vs. Liliana) both were released subsequent to the respective battles between the planeswalkers being portrayed in webcomics.

There has been no webcomic depicting a battle between Elspeth and Tezzeret as yet; however, both planeswalkers played a role in the storyline of Scars of Mirrodin block.

1 Seat of the Synod

The rares in this deck are Tezzeret the Seeker (holographic foil), Master of Etherium, Pentavus, Razormane Masticore, Steel Overseer, and Triskelion.