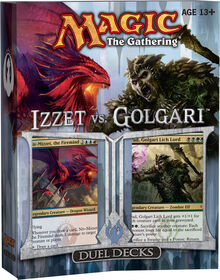 Izzet vs. Golgari contains two preconstructed theme decks, one centered on the Izzet League guild of Ravnica and the other around the Golgari Swarm guild. Izzet vs. Golgari depicts the struggle for supremacy, of the Ravnican undercity and of the wider Ravnica, between two guilds, ultimately stemming from ideological considerations.

In addition to this, the Duel Deck contains two copies of the

1/1 Saproling creature token, which is created by Golgari Germination and Korozda Guildmage.

1 Nivix, Aerie of the Firemind

The rares in this deck are Niv-Mizzet, the Firemind (holographic foil), Djinn Illuminatus, Galvanoth, Invoke the Firemind, Prophetic Bolt, and Sphinx-Bone Wand.

1 Life from the Loam

1 Yoke of the Damned

The rares in this deck are Jarad, Golgari Lich Lord (holographic foil), Doomgape, Gleancrawler, Golgari Grave-Troll, Life from the Loam, and Twilight's Call.