The two decks represent the age-old clash between mages and warriors, brains and brawn. Will calculated schemes of the mind outwit and prevail? Or will the pure, bold power of might triumph? Mind is represented by Legendary creature Jhoira of the Ghitu and Might is represented by Legendary creature Lovisa Coldeyes.[3][4] The two premium legendary cards, along with The Unspeakable, Desperate Ritual, Guttural Response and Zo-Zu the Punisher feature new artwork.

The Duel Decks include a Magic “learn to play” guide, a strategy insert, and a deck box, a spindown life counter and 5 tokens each.

Each deck contains 11 rares, compared to 6 in the preceding Duel Deck. 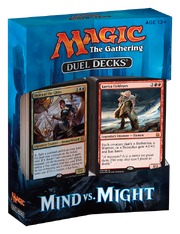 1 Jhoira of the Ghitu

2 Call of the Herd

1 Roar of the Wurm