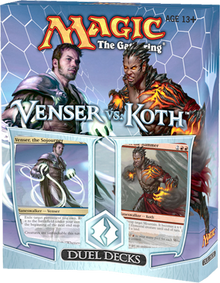 Venser vs. Koth contains two preconstructed theme decks, one centered around Venser, the Sojourner and the other around Koth of the Hammer. Venser vs. Koth depicts the struggle between two planeswalkers and is a set of largely flavor-based theme decks.

In addition to this, the Duel Deck contains one of each emblem card for each of the two planeswalker's ultimate abilities.[5]

Venser vs. Koth was panned by critics and was ill-received, with some citing a lack of power, lack of favorable card–card interactions or synergy in both decks, and the "broad but shallow" approach with themes and mechanics.[5]

Venser vs. Koth is based on the novel The Quest for Karn, which tells the story of the Scars of Mirrodin block.

1 Steel of the Godhead

The rares in this deck are Venser, the Sojourner (holographic foil), Clone, Galepowder Mage, Sphinx of Uthuun, Sunblast Angel, and Windreaver.

1 Koth of the Hammer

The rares in this deck are Koth of the Hammer (holographic foil), Bloodfire Colossus, Lithophage, Torchling, Journeyer's Kite, and Volley of Boulders.