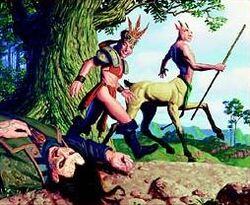 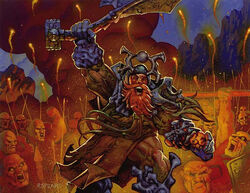 Kaladesh dwarves lean heavily to white mana, reflecting their focus on quality and order.[8] Many are Artificers. These meticulous artisans have an unparalleled work ethic. They rely on proven tools and methods, and they relish in the physical process of construction.[9] Other Kaladeshi races claim that dwarves are unable to feel fear. Having no concept of laziness or shortcuts, dwarves are valued within the Consulate for their work ethic.[10]

Dwarves are renowned through all the realms for two things: perfect weapons and exquisite storytelling. They are passionately creative, with an insatiable longing to constantly improve their craft. They strive to create the sharpest swords, the most beautiful jewelry, the strongest chains—and then immortalize their deeds in song and story. They seek to build things that last, to make their mark on the world so future generations remember them. Dwarven society takes the form of sprawling loose-knit clans that congregate in certain sections of the underground city. Different clans specialize in different crafts, and though they coexist amicably enough, they also have a strong competitive streak that sometimes sets them at odds.[11]

For dwarves, a warrior and a skilled artisan are one and the same. The art of combat and the art of creation draw from the same principles of focus, patience, and constant self-improvement. Every warrior-artisan has a signature weapon, which they unveil when they become adults on their 100th birthday; Their last names are based on these weapons. Red- and white-aligned dwarves approach these processes differently, but the perfection of their craft is equally important to both.

Dwarf warrior-artisans are prone to bursts of wild inspiration and get easily absorbed in their current projects. They produce weapons of staggering raw power—hammers that split the earth where they strike, blazing-hot swords that melt armor with a swing, and javelins that trail searing bolts of lightning behind them.[11]

Dwarf warrior-artisans are methodical and detailed. They follow disciplined processes and are capable of finer, more nuanced work than their red-aligned kin. Beautiful jewelry, armor that makes the wearer invisible, and chains forged from a wolf's tears are some examples of the handiwork of white-aligned dwarves. They are every bit as precise and meticulous in combat as they are in the forge.[11]

Skalds (dwarf clerics): hold a special place in dwarven society as the chief storytellers, the repositories of the sagas and fables that remind the dwarves of who they are. Since the dwarves keep no written history, storytellers are the bearers of an intricate oral tradition that has been passed down through countless generations. A skald is welcome in any dwarven community, always treated as an honored guest.[11]

Battle skalds: earn their title by returning home from battle to tell the story of the battle and its heroes. Their function is to collect tales of present heroism and accomplishment. They are revered across the realms for their bravery and storytelling ability, and they're often enlisted by adventurers or even gods to bear witness to some monumental feat.[11]

The dwarves of Shadowmoor are small, twisted, gnome-like creatures known as duergars.[12] The duergars live isolated lives deep beneath the surface in vast mines and tunnels where they constantly toil in search of riches. They are hard workers who can labor towards a single task for decades.