The first Elephant card was War Elephant in Arabian Nights. Aside from Khans of Tarkir, elephants were only within the green/white pairing. In general, anthropomorphic Elephants are white and wild elephants are green. 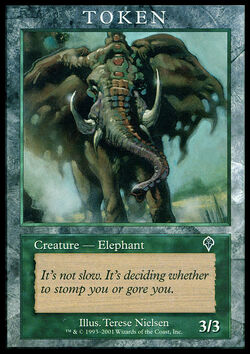 Rabian elephants are trained and guided by humans for combat. Their main use is to charge the enemy, trampling them and breaking their ranks. A division of war elephants is known as elephantry.

The elephants from Vintara have four long horns on the side of their head, no trunk, and small tusks. They are used by the rhystic mages of north-eastern Jamuraa.

Armodons are elephants native to Rath. They are distinct from other elephants since they have two sets of tusks, two large horns on top of their head and three or more horns on the base of their trunk. They are almost extinct.

Mammoths are elephantine animals with coats of thick brown hair and long, deeply curved tusks. They are found in Dominaria and Ulgrotha.

Wild Mammoths can be trained as beasts of war.

Honey Mammoths have a blue colored head and a big sweet tooth.

Ulgrothan mammoths were eventually almost entirely bred and kept in captivity, especially among the folks of An-Havva. They were used for difficult labor.

M10 introduced the Mastodon as a species of Elephant (Siege Mastodon).[1]

On Tarkir, Mastodons became extinct in the past, but foul forces of the Gurmag Swamp sometimes animate their decaying remains. The Sultai happily exploit such creatures but consider them inferior to their own necromantic creations.

Zendikar is home to terastodons, which are colossal elephants with nosehorns and multiple tusks.[2]

On Arcavios, the loxodons used to live in the city of Zantafar before becoming nomads. Occasionally, loxodons go to Strixhaven, the most elite school of mages in the multiverse. Some of them are part of the Lorehold college.

Most of the Ravnican Loxodons seek membership in the Selesnya Conclave, it being the most naturalistic of the guilds.[3] Unlike their non-sentient elephant cousins, all Loxodons are white or white-green creatures rather than only green. They are tireless, patient artisans with a gift for stonework.[4] It primarily falls to them to build the guild's magnificent, cathedral-like arboretum structures.

Loxodons were brought to Mirrodin via Memnarch's soul traps. In Mirrodin, they had as much metal on their bodies as any other beings and had a more clerical rather than a natural focus.[5] Inhabiting the Razor Fields, these Loxodons believed in the Modest Truth, a code of absolute morality that was taken at face value and passed on from generation to generation. In arguments, Loxodons proved stubborn and nearly impossible to sway. Some Mirrans even doubted if a Loxodon was able to think in shades of grey. Loxodons wandered around the fields, dispensing justice in form of physical punishment and offering atonement.[6] These loxodon ascribed religious superiority to those born albino, believing them to be spiritually pure. Long ago, the Auriok attempted peace with the loxodons, and the leonin attempted war; neither succeeded.

As Mirrodin became New Phyrexia, the Machine Orthodoxy's invasion of the Razor Fields isolated the remaining loxodon. The last remaining living loxodons on the plane are the ones who accompany Ghalma the Shaper, who has settled in Bladehold.

Loxodon can also be found in Tarkir. Allied with the Temur Frontier, these are very different from the Loxodon of other planes, resembling mammoths and being disconnected from White mana, instead of being red and blue (Avalanche Tusker) in addition to green. However, Hamza is a mere typical green/white Loxodon from the Dromoka.