Emmara Tandris is an elf and influentially high-ranking priest of the Selesnya Conclave on Ravnica.

Emmara is tall, slim, and graceful, and usually wears shimmering green dresses.[1] She has pointed ears, pale eyes, and a mass of golden hair. She is a close friend to Jace Beleren but understood that he was never going to be able to settle on Ravnica. That's why she believed the world needed a replacement for the Living Guildpact.[2] She is one of the most active advocates of cooperation between the Ravnican guilds. Emmara has a way of interrupting that doesn't seem rude.

Emmara was one of the highest-ranking members of the Selesnya Conclave to survive the riots that tore the guild down following the dissolution of the Guildpact. She moved on without much trouble, making her living as a powerful healer, earning enough to eventually move to the mansion district Ovitzia. She lived in comfort, attended by tiny construct dolls she made in the veritable artificial forest that stood inside her manor. It was here, in the upper echelons of Ravnican society that she met a young telepath named Berrim. The two quickly became casual friends, seeing each other every so often. However, that friendship would end up costing her more trouble than she could have possibly anticipated.

When Berrim became interested in the activities of the cabal known as the Infinite Consortium, it was Emmara he turned to. She told him what she knew of the organization and warned him against pursuing their "invitations", but he argued against that, wanting to truly test the limits of his powers. Weeks later, when a gift was delivered to her doorstep, she knew that he'd ignored her warnings.

Years passed before the two saw each other again, but Emmara's warnings proved well-founded. The next time she saw her friend, he had been tortured by Tezzeret, the master of the Consortium. Emmara healed him and once again urged him to leave, a warning he was much more inclined to follow, though his fear of what might happen kept him from leaving then. Years passed again before she heard anything about Berrim again... except, it was under a different name: Jace Beleren. She told them she knew nothing of his whereabouts, but inwardly she cursed him, wondering what sort of trouble he had gotten himself into now. She'd learn all too soon when Jace once again turned up at her doorstep bleeding horribly with Liliana Vess in tow. Liliana and Emmara immediately became hostile towards each other, arguing for Jace to take two totally different paths. She also confronted him over the fake identity he had used, demanding answers after he rested. However, Tezzeret's assassin interrupted their discussion, Emmara only surviving thanks to Jace's actions. The incident was enough to convince Jace to follow Liliana's plans and attack Tezzeret directly, knowing even his friends would not be safe so long as the artificer lived. Emmara understood, even if she did not approve. 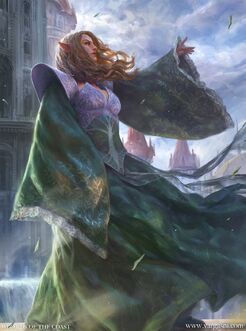 With the return of the guilds, Emmara was called back to serve by Trostani herself. The guildmaster commanded Emmara to look into the activity of the Izzet League and discover what they could possibly be searching for. Trostani granted Emmara command over the conclave's elementals to provide her with as much support as she might possibly need and Emmara accepted the position. Her first action was to visit Jace, knowing that he had returned to the Tenth District after traveling abroad for some time. The pair had long since put the Consortium behind them, but it was still a point of contention between the two. Emmara offered her forgiveness for what had happened, and Jace finally let go of the guilt he had been feeling. However, he had no intention of helping the Conclave, thinking it too dangerous for Emmara to get involved in whatever the Izzet was playing at. Unfortunately, they were both in danger already. House Dimir had already followed Emmara, and she had led them right to Jace.

Jace eventually did discover what the Izzet were after, but the secrets he had discovered proved too much and he sent an apology to Emmara, telling her he planned to erase his own memory of the entire thing. Emmara rushed down to the inn he was staying at just in time for him to begin, and she was left helpless as she watched him destroy his own knowledge. Her troubles just continued to compound, however, when the Cult of Rakdos showed up looking for Jace and herself, having been manipulated by the Dimir.

She voluntarily went with them, knowing that it was important to get them as far from Jace as possible. They took her to the undercity before she broke free of them, and hid in the Golgari controlled areas of the sewers. Jace, his memory of the Implicit Maze erased, eventually tracked her there, but he was ambushed by Varolz. Using her power over elementals, she saved her friend, but with both of their prizes together, the Dimir struck, attacking them both in one fell swoop.

Mirko Vosk gravely wounded Emmara and only being driven off by Jace's loss of memory. After tending their wounds, the pair headed back to Vitu-Ghazi. When they arrived, Emmara was received warmly and Jace with suspicion. Jace was introduced to Emmara's paramour, Captain Calomir. Emmara's abduction had sparked hostility within the guild, spearheaded by Calomir. Jace, feeling put upon tried to read the man, only to discover he couldn't. Jace warned against listening to the captain, but his suspicions were ill-received, and he was quickly thrown from Conclave territory. 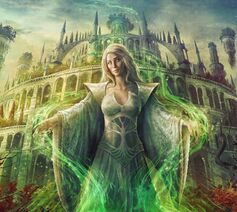 Emmara returned to her abode, to find it teeming with Selesnyan soldiers, ostensibly there for her protection. She confronted Calomir about it, but he deftly shut her down, dismissing her fears with saber-rattling of his own. Emmara went to confer with Trostani over it all but found herself the lone voice in a song calling for war. With no choice, trapped by her commitment to the guild, she agreed to summon the greater elementals of the Selesnyan Conclave.

The forces of the Selesnyans marched to war against the Rakdos and caught in the frenzy, and the manipulations of the Dimir, they drove their army straight into the ranks of the Boros Legion. As battle erupted around her, Emmara began to understand the flaws inherent in the Conclave, the inability for the guild to think outside itself. Trostani seized control of Emmara's elementals and commanded them to war. The Conclave's forces were met by the Rakdos and began to attack each other fervently, but the battle was interrupted as Niv-Mizzet made a district-wide announcement, revealing very nearly every secret behind the Implicit Maze. Emmara was taken into custody, accused of treason against the guild. She desperately reached out to Jace, and in touch with his mind, she learned that Lazav had taken Calomir's place months ago. Heartbroken, she begged Jace not to break contact, but the situation was quickly taken out of his hands. Before he went, he gave her everything he knew about the maze's route and told her that she had to be chosen as the maze runner.

Imprisoned by her own guild, she lured Lazav and managed to expose him, but in doing so, she sowed dissent amongst the unity of her guild. Two of the Three minds behind Trostani directed enmity at her for this, and when she arrived at the start of the maze, Jace was her only companion. Along with her friend, she managed to make her way most of the way through the maze until the pair were confronted by Ral Zarek at the Izzet Guildgate. There, the other planeswalker forced Jace to reveal the depths of his lies to his friend, and feeling betrayed, she was allowed through the gate while Ral and Jace began their arcane duel.

Arriving at the Rakdos guildgate, she was confronted by Exava, still furious over her earlier defeat. Exava ranted at Emmara, who stood alone against the onslaught as Exava summoned demons to attack her. She managed to weather the attack, but all the reward she would receive was to be dealt with by Rakdos himself. As the demonic guild master loomed over her, ready to strike, Trostani arrived with reinforcements, apologetic for the trials Emmara had suffered.

Arriving at the Forum of Azor along with the other maze runners, she fell under Lazav's influence again. The champions began to fight and as the Maze was about to activate and wipe the guilds and tenth district from the world, Jace intervened with his telepathy and saved them.

Several days later, Emmara visited her friend. She congratulated him and granted him a kiss, an apology for everything that had happened between them, however, she came with a request as well. Her knowledge of the worlds outside Ravnica and who Jace was, was tearing her apart inside. She asked him to erase that memory from her mind, and sadly, Jace acquiesced. She offered him her assistance at any time and left, none the wiser for what she'd asked Jace to do. 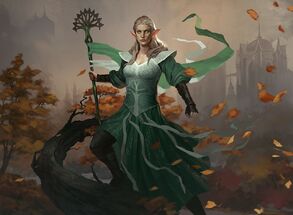 Soul of the Accord

During the unrest before the War of the Spark, the three heads of Trostani were in discord.[2] While Harmony remained mysteriously and utterly silent, Order argued in favor of a peace treaty with the other guilds, while Life wanted to focus on building the strength of the Conclave.[3] The fact that the dryads were divided meant that Trostani was virtually paralyzed and faded into the background of events. Emmara stepped forward to fill the void in leadership, when glademaster Garo was revealed to be in league with Nicol Bolas.[1] She was committed to pursuing peace between the guilds with all her heart, even as Trostani hesitated in self-conflict. As a friend of Jace Beleren, she understood that he was never going to be able to settle on Ravnica, so she believed the world needed a replacement for the Living Guildpact. As one of the most active advocates of cooperation among the guilds, she was relying on personal connections with members of other guilds to help that effort.[2]

She attended the guild summit on behalf of the Conclave, and witnessed its dissolution after the murder of Isperia.[4]

Emmara and Trostani met with Kaya, Teyo, and Rat when they sought the cooperation of the Selesnya to revive Niv-Mizzet.[5] Emmara spoke to them first, and declined to participate in their plan because Selesnya had always been a victim in Izzet plans. But the party argued that Bolas's victory would bring about the end of all life, and Harmony, the middle Trostani, finally woke up and decided that Selesnya would be joining the other guilds to defeat Bolas.

Emmara served as the representative for the Selesnya at the resurrection of Niv-Mizzet as the new Living Guildpact.[6]