Emrakul, the "Aeons Torn," is one of the three Eldrazi titans and the inspiration for the Zendikari merfolk god Emeria. 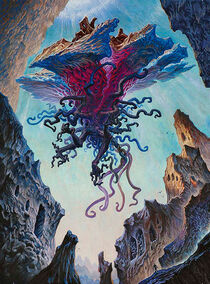 Emrakul is the Titan of Corruption, the largest and most fearsome of the Eldrazi. She does not affect inorganic matter - rocks, water, etc. - but twists all things living, be they plants, animals, or other sentient beings. She causes silent terror wherever she soars, embodying desolation, emotional and physical distance, the chill of the void, and the terror of being alone.

The Emrakul lineage is characterized by flesh-like lattice structures, uneasy bilateral symmetry, and tentacles that end in knobby, vestigial digits. Looking like spongy, alien baleen, the lattice respires independent of the Eldrazi herself, supporting a host of unseen mite—creatures within. Some within this lineage, including Emrakul herself, float above the ground, using unknown powers to alter the surrounding gravity. 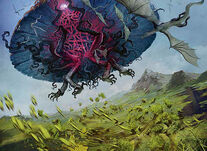 After the release of Kozilek, Ulamog, and Emrakul by Nissa Revane, Emrakul vanished. After the death of Kozilek and Ulamog, Ugin confirmed that Emrakul had been absent from Zendikar for some time.[1] She was drawn through the Blind Eternities to the plane of Innistrad by the planeswalker Nahiri, who was summoning Emrakul to enact her revenge on Sorin Markov.[2] On Innistrad, her influence corrupted the people of the plane into tentacled monstrosities. The archangel Avacyn kept Emrakul at bay, but once she was unmade by Sorin, the titan physically entered Innistrad and her influence over the plane magnified. Jace Beleren returned to Zendikar to call the remaining planeswalkers of the Gatewatch: Gideon Jura, Nissa Revane, and Chandra Nalaar, in order to combat Emrakul, like they had Ulamog and Kozilek on Zendikar.

After destroying much of the city of Thraben, Emrakul is confronted by the Gatewatch and Liliana Vess, who are nearly brought down by her mental assaults. Jace communicates with a figment of her that manifests as Emeria, which tells him that she is "incomplete, unfulfilled, inchoate" and that Innistrad should welcome her, not reject her. When the Gatewatch performs the ritual to trap her, she willingly lets herself be sealed in Innistrad's moon. She possesses Tamiyo and has her read a scroll she has vowed to never read, after telling Jace, "I just no longer want to play" and "There should be blossoms, not barren resentment. The soil was not receptive. It is not my time. Not yet."[3]

Emeria also appeared at the end of Nissa's vision of Nicol Bolas' plan while she was taking the Trial of Knowledge on Amonkhet. It is unknown if this communication really originated from Emrakul.[4]