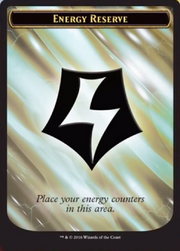 An energy counter is a counter that, unlike most other counters, is placed on players rather than objects. They may be used to pay the costs of activated and triggered abilities. Energy counters and the Energy mechanic were introduced in the Kaladesh block.[1] The energy symbol

is used to represent a cost for energy counters.