Eternal Masters is a booster-based compilation set containing cards legal in, and intended for, the Legacy, Commander, and Vintage formats. It was released on June 10, 2016.[3][4] 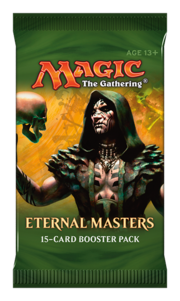 Eternal Masters is a 249 reprint set[5] containing some of the most sought-after cards from throughout the history of Magic — some with new artwork. Eternal Masters is designed to be a unique and enjoyable Draft experience, much like Modern Masters. It does not contain cards from the Reserved List, but it features many Eternal staples. It is aimed at a more advanced player.[6] Eternal Masters was inspired by the Magic Online-only set Vintage Masters, but adds some Modern-legal cards to make the archetypes work.[7][7]

Eternal Masters is exclusively booster-based, thus no satellite products such as Preconstructed decks are branded with the set. Each booster contains 15 playable cards: 10 commons, 3 uncommons and one rare or mythic rare, and one foil card of any rarity replacing the basic land which would normally be found in a booster as Eternal Masters does not contain a run of basic lands.[8] The 16-card boosters (the sixteenth card is a marketing card) feature artwork from Deathrite Shaman, Bloodbraid Elf and Goblin Charbelcher.[9] Due to the higher expected average value of the cards contained in a booster and the lower print run, the MSRP of one booster of Eternal Masters was set to $9.99 (with the MSRP of a booster of the current draft set being $3.49). Due to the higher MSRP booster displays only contain 24 packs, which is also the number required for a regular draft (three boosters for each of eight players), as the set was designed specifically for draft. A number of cards also change rarity to create a better drafting environment.

The set is printed in English, Japanese and Chinese Simplified. Because of the popularity and the limited print run, the distribution is WPN exclusive and partially allocation based.

On February 16, 2016, the Twitter account MTGDeepthroat@Vendorleak accused 2-3 unnamed vendors of possession of the card list for Eternal Masters and insider trading. WotC started an investigation, stating that they didn't provide preferential treatment to any card vendor, distributor, or retailer; nor disclosed detailed card set information prior to preview season.[10] The account @Vendorleak later apologised and said they had been mislead and the evidence they had was fabricated. Their Twitter account is currently suspended.

Eternal Masters will be releasing on Magic Online June 17 and will be available until July 6. The digital MSRP will be $6.99. It will not be available for redemption.

There are four cycles in Eternal Masters, one of which is a double cycle.

There is one mirrored pair in Eternal Masters.

The set comes with 15 tokens and one emblem, some of which are printed for the first time.[13]

On the back of these tokens appear segments of text hinting to Conspiracy: Take the Crown.