Eternalize is a keyword ability introduced in Hour of Devastation. Eternalize is centered in white and blue, but shows up once in each of the other colors.[1] Storywise, the mechanic is linked to the Eternals, Bolas's army of Zombie Warriors, mummified through the use of lazotep.[2]

The eternalize ability only can be activated if the creature is in your graveyard. When activated, the card is exiled but it creates a token copy of that creature. Moreover, this creature token has four changes: its power and toughness becomes 4/4, it has no mana cost, it is a zombie in addition to its other creature types, and it becomes a monocolored black creature.[3][4][5] 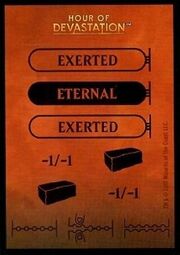 The Hour of Devastation set features a token card for each creature card with eternalize to emphasize the flavor of the Eternals. These supplements are not required to play with cards with eternalize; you can use the same items to represent an eternalized token as you would any other token. For easy play, extra "eternalized" markers were provided on punch cards.

Eternalize is an evolved Embalm.[4] Many eternalized creatures have abilities that get better because of their increased power.[3] However, the mechanic proved a better plot device than as a step forward for Embalm; with its narrow designs, worse popularity, and significant infrastructural requirements, it landed an 8 on the Storm Scale.

Eternalize made a reappearance in Modern Horizons 2, on two well-known cards that have "eternal" in their names. In this set, it features the first creature to be eternalized with smaller stats than the original.

Eternalize
A keyword ability that lets a player exile a creature card from their graveyard to create an eternalized token version of that card. See rule 702.129, “Eternalize.”

, Exile this card from your graveyard: Create a token that's a copy of it, except it's a 4/4 black Zombie Cat with no mana cost. Eternalize only as a sorcery.)