Fate Reforged was announced at the Wizards of the Coast panel at PAX Prime on August 31, 2014.[3] It contains 185 cards (10 basic lands,[4][5] 70 commons, 60 uncommons, 35 rares, 10 mythic rares) and includes randomly inserted premium versions of all cards. The expansion symbol of the set is a stylized representation of two opposing planes or realities because the large sets of the block represent alternative timelines. This middle set, representing the past, is the precursor to both. The set had to be designed so it worked mechanically with both Khans of Tarkir and Dragons of Tarkir.[6] It is designed to be drafted with both large sets, while the large sets are never drafted together. Fate Reforged draft is one pack of Fate Reforged and then two packs of Khans of Tarkir.[7]

Because the clans of Fate Reforged are less defined, the set does not contain many gold cards - a cycle of enemy color at common, and a cycle of allied color at rare. There are no three-color cards, with the spells that pull towards a particular clan names an enemy color and an allied color, either by controlling another permanent or by using hybrid color costs (for example, Yasova Dragonclaw and Temur Runemark, Temurs card with green mana cost, and blue/red to maximise them). This lets Sultai and Temur decks in Fate Reforged draft and Gruul and Simic decks in Dragons of Tarkir draft play them. Like in Khans of Tarkir watermarks are used on the cards for the different clans, while adding slightly altered watermarks for the related dragon broods.[8][9] The foil versions of the cycle of Sieges and Crux of Fate (all of which present a choice between Khans and Dragons) have a special overlay and finish which transitions seamlessly between the expansions symbols of Khans of Tarkir and Dragons of Tarkir.[10][11]

The set features the colorless planeswalker Ugin, the Spirit Dragon.[12]

Sarkhan Vol travels 1,280 years back in time, to change the moment that sealed Tarkir's fate: the battle between Nicol Bolas and Ugin, the demise of the latter and of all the dragons of Tarkir (Crux of Fate). The clans still exist back in that time; they are not fighting each other, but are constantly fending off the hordes of dragons that are terrorizing their world.[13] Sarkhan meets khans of the past, like Yasova Dragonclaw.[14][15] The history of Tarkir is rewritten.

Fate Reforged is sold in 16-card boosters (the 16th card being a marketing card), five intro packs, a clash pack and a fat pack.[16] The boosters feature artwork from Ugin, the Spirit Dragon, Temporal Trespass and Vaultbreaker. Korean, Portuguese, Chinese (Traditional), and Russian boosters contain basic lands at a high frequency alongside nonbasic lands, as Fate Reforged basic lands were not otherwise printed in those languages. Those languages do not have Intro Pack releases and Fat Pack releases which is where these basic lands predominantly appear in other languages.[4]

At the Fate Reforged prerelease on January 17/18, 2015, players chose their clan.[17] While they completed three achievements, they follow in Sarkhan's footsteps to attempt to alter fate; they get to "Heal Ugin" and "Gain a glimpse of the future". The latter comes in the form of a special "Ugin's Fate" booster pack containing two alternate art cards that show how the world has changed in the new timeline, a Manifest token (with a different advert back than regular manifest tokens found in Fate Reforged booster packs) and one of 10 Fate Reforged basic land cards. There's a pool of 26 alternate art cards - 13 from Khans of Tarkir and 13 from Fate Reforged - all with a holofoil stamp. Art on the reprints from Khans of Tarkir were dragonified in order to show off the alternative timeline where Ugin was saved by Sarkhan Vol. Art on the "reprints" from Fate Reforged were Ugin-ified by featuring Ugin in some form in their artwork.[18][19] A comparison of the normal and promo cards can be seen here.

The sixteenth card in the boosters can be a token or overlay card, with an advertisement on the back side. The overlay card can be used on face-down Manifest cards to remind players of their power and toughness and that it can be turned face-up for its casting cost, or Morph cost if it is a Morph creature.[21] 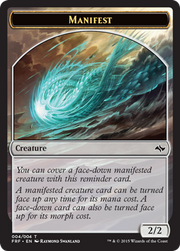 Choice is a major theme of Fate Reforged. That's why there are three cycles of modal cards in the set.[22] The choice theme plays up the crossroads-of-history feel of the set. At higher rarities, abilities of choice are preceded by anchor words (namely, "Khans" and "Dragons") that give them a bit of flavor.[23][24]

Fate Reforged sees the return of the wedge clans of Tarkir, in an altered form.[25] Hybrid mana makes a return and appears in the cost of some card effects, notably the khans.[26] Although morph does not return, a new, similar mechanic, manifest, can put into play any card as a face-down 2/2 creature.[27] An overlay card may be used as an reminder.

Two of the clans from Khans of Tarkir receive a new mechanic (which will also be featured in Dragons of Tarkir [28]):

The other three clans retain their original mechanic:

The clans are juxtaposed with 5 dragon broods, which feature their own watermarks.

Fate Reforged has twelve cycles and one mini-cycle.

Fate Reforged has one mirrored pair.

As the fetch lands that appear in Fate Reforged boosters feature a Khans of Tarkir expansion symbol, they are technically not reprints.[4]

Fate Reforged comes with a clash pack which contains a wedge-colored and a bicolored deck.[32]