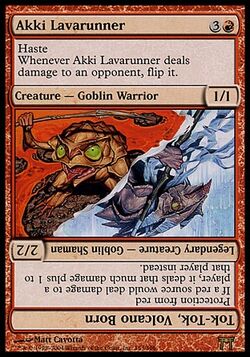 This article is about the cards that appeared in the Kamigawa block. For the cards that premiered in Innistrad block that are sometimes colloquially referred to as "flip cards", see double-faced card.

Flip cards are two cards in one. When something is triggered, the card is flipped and becomes the "other" part of the card.

Now that double-faced cards exist, R&D has no plans to do any more flip cards.[2][3] They are considered a failure.[4]

You ignore the information on the bottom half of the card until the creature in play "flips" when certain heroic conditions are met. When you flip a hero, you turn it upside down and play with the other half of the card. All of the flipped versions are legendary and have powerful abilities.

Flip Cards
Cards with a two-part card frame (one part of which is printed upside down) on a single card. See rule 709, “Flip Cards.”

All flip cards are from the Kamigawa block.

All of these cards are based on playing two spirit or arcane spells, which gives the card two "ki" counters and allows them to flip into a legendary Spirit creature at end of turn. The ki counters may then be removed from the flipped creature for an effect. The flip cards in this block are all uncommons that cost

MM (where M represents a colored mana), and start as 2/2 creatures.

All of these flip cards are rares that start as legendary Monk creatures with a flip trigger. When flipped, they become Legendary enchantments with a somewhat-related static ability.