Foil cards, officially styled as premium cards,[1] are Magic cards which have a foil or "glossy" finish to them. 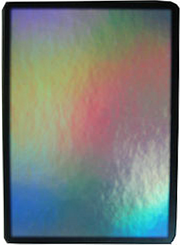 Foil layer on a card back 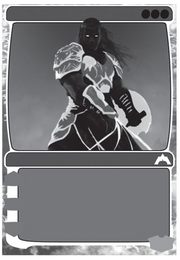 Underprinting on the foil layer

Physical elements of a Magic card 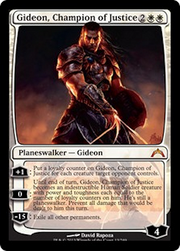 The process involves a special metal foil layer on the card that highlights certain parts of the artwork over others (the lighter areas are more reflective). All foil cards are black-bordered, even those from the last white-bordered core sets, the exception being that of the Un-sets, which are silver-bordered. Foils do not pass the bend test; because foil cards have metal on the front, they crease when bent.

Foil cards are randomly inserted in Draft booster packs. From Core Set 2020 forwards, 1:45 cards in Draft Boosters is foil, instead of the previous 1:67.[2][3] Collector Boosters, introduced in 2019, and Set Boosters (introduced in 2020) contain foils in higher rates. Mythics, rares and uncommons are harder to locate than commons, just like their unfoiled counterparts.

Prior to Time Spiral, if a (Draft) booster pack contained a foil card it would replace the card normally found in that rarity. (i.e. the card Shared Triumph is rare if there was a foil version in a pack it would replace the card found in the rare slot). Starting with Time Spiral, in every set a foil card replaces a common card regardless of the rarity of the foil card.[4] This means there is a chance of getting two rares (or three in the Innistrad, Dark Ascension, Shadows over Innistrad or Eldritch Moon packs due to the double-faced card slot) or even mythic rares in a single booster pack: one foil, and one regular (as well as one double-sided in the aforementioned sets).

The foil process has not always been the same through the years. There have also been different foiling processes used for release cards (which creates a diagonal-slant effect), From the Vault: Dragons (double-foiled), supplemental sets (usually lower quality), etc.[5]

Urza's Legacy was the first set to feature foil cards in booster packs.[6][7][8] However, Lightning Dragon was the first widely-available foil premium card, as it was the card given away at the Urza's Saga prerelease.[9]

Pre-Modern foils have a shooting star in the lower-left-hand corner of the card. The process to create these cards involved a problem where certain foils would include a "cutline" or "printline": a seam in the foil treatment across the face of the card.

These foils have an extra layer on the card that highlights certain parts of the artwork over others, the "white under-print plate", or "WUP."[11] The holographic foil laminate (a metallic "sticker") has to be bonded to this WUP and the regular card back. After being allowed to "cure" for several weeks, the foil laminate is then overprinted with regular paint for the matching card art. Foil laminates are tricky on playing cards due to the standards needed for wear resistance and ease of shuffling.

Even trickier are the challenges of printing on the foil background.[12] Opaque areas require a base of white ink, and black and white inks have to be double-printed for readability. Instead of the normal four- or five-color process, premium cards require eight separate color plates. Film alignment has to be precise - even slight misregistrations can ruin an entire sheet.

You can peel the foil laminate off a traditional foil card, which leaves the paper card with a blank white front.

From the Vault[edit | edit source]

From the Vault sets were printed using a special foiling process that was unique to the series. They were printed on a foil stock that is twice as reflective, and treated with a varnish.[13] This resulted in a shinier and stiffer card that had an almost 'holographic' look to them. They feel much slicker to the touch and weigh a notable amount more than a regular foil. From the Vault cards are also exceedingly hard to write on (e.g. an autograph). However, these cards were also notable for having many production issues, like one-pixel vertical lines going down the card-face. They were also more prone to curl, regardless of moisture (but moisture makes it worse).

Commander Legends introduced the "foil-etched" treatment. These cards use a brand-new foiling process that looks different from previous foils.[14][15] From that moment on, the regular foil was called "Traditional" foil.

Foil-etched is sparkling shiny when touched by light. It doesn't make use of a foil laminate, but instead uses metallic paint. It doesn't cover the whole card, but only highlights specific parts. If there's a star next to the collector number, the card is etched foil.

The foil-etching process presents an interesting twist when dealing with older cards in Modern Horizons 2.[16] In the early days of Magic, Wizards of the Coast didn't have custom WUP treatments for artwork, so on foil-etched retro frame cards, the foil effects don't show inside the art box itself.

Foils are notoriously harder to keep in Near Mint condition than non-foil cards.[5] They tend to collect dirt easier, creating a "cloudy" look on the front of the card. They can also have more noticeable print lines (especially on foils made pre-Eighth Edition when they changed the foiling process), tend to curl/bend/warp a lot easier (especially in warmer climates), and don't shuffle as well.

Traditional foil Magic cards are made of two things, cardboard and metal foil.[17] Like all paper materials, magic cards have a tiny amount of moisture within the cellulose pulp. This water is partially what gives paper flexibility without snapping it. If you remove the water, the paper becomes more brittle. If you add more water, it becomes more flexible. One way this occurs naturally is through humidity, which can cause the water content inside a card to fluctuate. It's this fluctuation that causes cards to grow or shrink, on a virtually imperceptible scale.

With non-foil cards, this doesn't cause a problem because the entire card expands evenly. But on foils, this can cause the cards to curl because while one side of the card is made of cardboard that changes size when water is added or removed, the other side is covered in a metal foil layer that does not expand through moisture. If you store your cards in a very humid environment, the cards will curl with the backside of the card bulging out because the backside of the card has room to expand while the front half is fixed in place by the foil layer. But if the humidity is lowered, this causes the water to go down, causing the cardboard to shrink, and the front side to bulge out.

But humidity is not the only factor that causes cards to curl. Much like how humidity causes the cardboard to grow and shrink, the same happens to the foiling when exposed to heat, because heat causes the metal to expand, and lower temperatures cause it to contract. These two factors control how much a card warps. If the temperature and humidity are at the temperature the cards were printed at, they won't curl. If you keep your cards in a super dry environment and under a lot of heat, you are going to get extreme curling. Keep them super cold and damp, and you'll get extreme curling in the other direction.

In Magic, “foil” and “premium” used to be (almost) synonymous. Wizards of the Coast say “premium” because they want to use a consistent word for all their products and not all their premiums in every product are foil.[18] For example, Duel Masters had some promo cards printed on metal.[19] In actuality, foil is a subset of premium.[20] Back before Wizards of the Coast started making foil cards, the prerelease cards were still premium thanks to the gold-stamped date.[21] In fact, any special treatment, including unique layouts or stamps, is considered premium.[22] For example, a Game Day promo of Abrade is also premium. As such, it can be used with the Un-card Super Secret Tech, that care about premium cards.

With the introduction of Booster Fun in Throne of Eldraine the Premium range was expanded upon with showcase cards, extended-art and borderless planeswalkers.[23] All the Booster Fun frames are premium cards and they exist in foil and non-foil.[24][25]

The Premium Deck Series were Box sets that consisted of all foils.