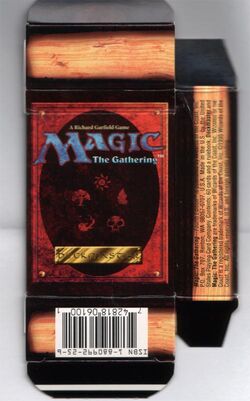 A box of USPCC-printed Fourth Edition.

The so-called Alternate Fourth Edition is a unique print run of the Fourth Edition set – likely the first attempt to produce Magic cards within the United States.[1] This printing is sometimes confused with "Summer Magic", which was a version of Revised Edition. They are similar in some ways, but occurred at different times, by different companies, and in different sets. They are unrelated.

The cards were printed in early 1995, apparently by The United States Playing Card Company in Cincinnati, Ohio, USA. USPCC also printed the re-release of the Wizards of the Coast card game Vampire: The Eternal Struggle (formerly Jyhad) in October 1995, and the first expansion of that game, Dark Sovereigns in November 1995. It is unknown if the Alternate Fourth Edition cards represent a test printing by USPCC to gain business with WotC, a limited emergency print run to meet demand at the time, or a full parallel print run intended for the mass market.

Due to unknown circumstances, the companies ended their business relationship in 1996 after a closed settlement was made in cooperation with the American Arbitration Association. The USPCC Fourth Edition cards were apparently scheduled for destruction, but a large number of unopened packs (all starters) have been found in locations around the world, though most often in the U.S. Midwest region. Individual cards, being almost indistinguishable from normal ones, have often been found mixed in with collections, card store stock, and trade binders.

The existence of these cards was discovered by former Pro Tour player Dan Bock and brought to public attention in an article posted to MTGNews on June 24, 2002.[2]

These cards look extremely similar to standard Fourth Edition Magic cards in normal light. The USPCC versions often seem more vividly colored. The card stock is a bit different and features a glossier finish. USPCC cards tend to have a peculiar wear pattern, in that they develop more edge-whitening than normal cards.

A special coating was applied to these cards by USPCC which protects the colors from fading in sunlight. This coating also causes the cards to stay dark under strong ultraviolet light, or "black light". The aforementioned V:TES cards exhibit the same properties, while standard Magic cards glow brightly. Videos by set discoverer Dan Bock demonstrate these traits.

Only starter decks of Alternate Fourth have appeared in circulation, via unknown means. They are packaged the same as standard English Fourth Edition, except that the legal text refers to USPCC and they have different ISBN. In terms of the outer wrapping of a Starter Deck Box, this one is circular in 2 of the sides, while the alternate version is a full complete seal all around.

The alternate starter decks have no inner seal when you remove them from the box, contrary to the normal version.