Garenbrig is the green-aligned court of the Realm on the plane of Eldraine.[1][2] It borders on Vantress and the Wilds. 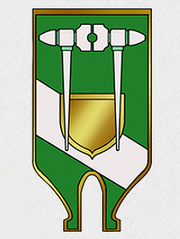 Garenbrig's symbol is a pair of hammers referencing the form of the Henge.

Unlike Vantress and Ardenvale with their many villages and towns, the border region of Garenbrig appears desolate and uncultivated. The roads are walled and standing stones cluster in mysterious formations on hilltops.

Garenbrig is ruled by King Yorvo, a giant. The giants of Garenbrig threw off human kings generations ago, but they honor the human High King. Garenbrig exemplifies the virtue of Strength, and is home to the Great Henge, a massive stone ring built by the giants before humans rose to power. The Henge is both an enormous sundial and can be used to magically travel to any location in the Wilds. Everything that inhabits Garenbrig is affected by the wild magic flowing through the Henge. Yorvo's subjects consist of both humans and giants. The knights of Garenbrig dress in mail coats covered with green tabards, and wear their hair long. Above all, they prize raw physical strength. However, not simply for its own sake but to use that strength to defend those who lack it. Some of them ride on bears.[3] To become a knight of Garenbrig, one must demonstrate a great feat of strength, something beyond the capabilities expected of their size and species.

The castle and the henge[edit | edit source]

Built by giants long before the ascendancy of humans in the Realm, Castle Garenbrig is an enormous and strikingly odd structure. A huge stone outcropping juts out over a valley's lower ground. Its southern end is rooted to the earth by stone and massive tree trunks, while the northern portion extends like a roof over flat earth beneath. A monolith too large even for giants to move has fallen to rest at an angle against the fixed end of the outcropping, like a ramp to the sky broken violently off. Trees tangle their way partway up the stone's slope. Atop the outcropping stands the Great Henge and its portal. Monoliths of ordinary size have been set up in concentric circles around the base of the outcropping. The valley itself is verdant with stone-walled orchards and winter-fallow gardens. Incised menhirs have been erected in circles, rows, and as isolated singletons throughout, like guardians. Bold mountains form a backdrop.

The actual castle is build beneath and around the outcropping of stone at a more human scale. The palace is a warren of rooms built into roots and rocks, paths worn into the stone floors by the uncountable footfalls of generations of inhabitants.

The Great Henge of Garenbrig is a puzzle as well as a test of strength.[4] At the center of the Great Henge stands the portal, a rough circle of stones with a larger standing stone in the middle. By shifting the stones of the portal to a particular alignment, the destination in the Wilds might be configured. This a feat that only Giants can manage.