Global Series: Jiang Yanggu & Mu Yanling is a pair of Chinese-market-specific Planeswalker Decks featuring two new Planeswalkers, and new cards themed around their story.[3][4] It was released on June 22, 2018.[5]

These two 60-card decks were originally designed by a team of Chinese artists, writers, and folklorists to explore a new branch of Magic lore rooted in Chinese aesthetics and mythology. A similar English version of the same product was created for international audiences. The decks are only released in the Chinese Simplified and English languages.

The set only features four types of basic lands, which are based on locations, stories, and/or traditional Chinese representations of these land types. The Swamp is missing because none of the decks feature black spells.

Despite the name Global Series this product is one of a kind. 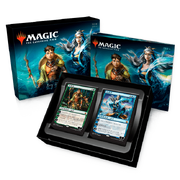 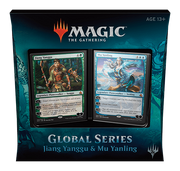 Jiang Yanggu and Mu Yanling ware created in a collaboration between the Chinese office of Wizards of the Coast and US R&D.[6] Unlike the previous foray in the Chinese market, Portal Three Kingdoms (1999), this set is part of Magic canon, is directly compatible with other current sets. While the cards in it are not designed for serious tournament play, Wizards of the Coast wanted to make sure the fans it was created for — new, Chinese-speaking fans — could still play with the cards at a Friday Night Magic when they were starting out. The set is Standard legal exclusively in mainland China.[4] Though the cards will be legal for Legacy and Vintage use, they will not be legal in Modern. In order to avoid fractures in the international competitive scene, Play Design made sure that the cards were balanced so that none of them were cards appealing for Constructed.[6]

Similar to Duel Decks, both decks are sold in one package.

The set features one double-faced token:

This set introduces the Pangolin creature type, and the Yanggu and Yanling planeswalker types.