Gnottvold is one of the ten realms of the plane of Kaldheim.

The unspoiled wilds of Gnottvold are marked only by the overgrown ruins of ancient giants and occasional crude wooden shelters built by trolls. The Hamundar Forest is a dense, primordial wood made up of towering trees and lush undergrowth. In one sacred site deep in the forest, called Karo Glade, a cluster of weathered standing stones is encircled by a ring of the largest, oldest trees in the realm. These stones are believed to predate even the giants' long-lost civilization. The rocky highlands of Mossrun are littered with boulders and broken ruins, including a number of crude cairns and barrows left by the ancient giants. Atop a high cliff overlooking a vast stretch of forest, the largely intact remains of an ancient fortress called Reynir Hall stand preserved by runic magic from a bygone age. A steep, treacherous path leads up the cliffside to the hall, which provides shelter to a horde of belligerent, hungry trolls a strong deterrent to any explorer who might think to plunder the ruins for ancient magic. [1] 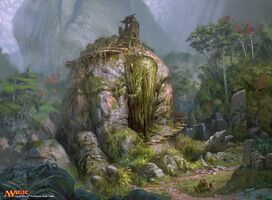 The ancient ruins of Gnottvold provide some degree of shelter to two distinct varieties of troll. The smaller, more aggressive Hagi trolls run wild across the realm, hunting in disorganized packs. They like to harass the larger Torga trolls, who live in family groups and can sleep for years at a time. Despite their apparently somnolent nature, a Torga troll that is unexpectedly awakened from its slumber rises in a rage and sets out on a destructive rampage that can last for weeks until the troll is spent and looks for a new place to sleep.[1][2] 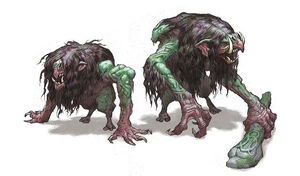