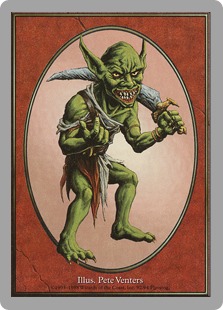 Goblin is a creature type.

A dominantly red-aligned race living throughout the multiverse. Goblins inhabit most planes in some form and they come in a multitude of shapes, colours, demanours and sizes. Though most are quite dim-witted, there are some exceptions such as Slobad from Mirrodin, Squee, lookout of the Weatherlight and the Kyren goblins native to Mercadia. Most card sets feature goblins in some form.

Goblins have long been one of the most powerful tribal creature types in the game. Even in Eternal formats, goblin-based decks can be extremely fast and remain competitive. They are primarily small, cheap creatures, and as is common for goblins in most fantasy settings, work best when you have many of them in play. Because they are small and cheap, many goblin cards actually expect to die. Mudbutton Torchrunner (create) is actually worth more dead than alive, and Mogg Fanatic is ready to dive-bomb itself at any given moment.

Due to the competitive status of goblins in red, Lorwyn block put them primarily in black with red as their secondary color. This exposure to black allowed goblins to gain a reanimation aspect (represented by a tremendously high birthrate), and thus reduce the potential drawback of their kamikaze tendencies.

The Mirrodin goblins. These are famous for worshiping the fire of the forges. They housed the leonin and humans during the great battles. Other than this, they have no significant place in the story.

Small, mischievous, dimwitted goblins that live in the Sokenzan mountain range of Kamigawa. They are long-armed, shelled creatures who take glee in pulling tricks on travelers. Unfortunately, these tricks generally involve the launching of fireworks, avalanches, fire traps, or just general savage beatings.

Native to Lorwyn. Unlike most Goblins, Boggarts are primarily black-aligned, as opposed to red. They form large, self-contained clans that live in swamp warrens under the leadership of an Auntie. Boggarts occupy themselves by playing tricks on the other races in order to acquire "treasure" - anything from a bucket to rare jewelry. Boggarts then share the loot - and, more importantly, the story - with the rest of their clan. Anyone who refuses to do so is exiled.

The Kyren goblins live on the plane of Mercadia. They are much smarter than Dominarian goblins, but also cowardly. They always speak in questions and never allow wrong answers. When the Weatherlight planeshifted to Mercadia from Rath, the Kyren made cabin hand Squee a general. However, Squee soon discovered that the Kyren were building flying ships for the Phyrexian invasion of Dominaria. Surprisingly, the Kyren originated on Dominaria. When Yawgmoth began his conquest of the city states of Halcyon, a planeswalker named Dyfed and the wife of Yawgmoth's enemy, Rebbec, transported the nobles to the plane of Mercadia. With them they brought Glacian's (Rebbec's husband) goblins. This was done for protection and to forage for food. Over time they realized the nobles needed them to live, and started manipulating them so the goblins came in control, and eventually evolved. Their most favored weapon is the blow dart.

A vicious, strong and particularly stupid breed of Goblin native to the artificial plane of Rath. Moggs were trained to find artifacts by smell by Volrath, evincar of Rath, whom they served blindly.

A few Moggs apparently survived the invasion of Dominaria and eked out an existence within the mountain chains of the plane, evidenced by the Time Spiral card, Mogg War Marshall.

Retrieved from "https://mtg.fandom.com/wiki/Goblin?oldid=55741"
Community content is available under CC-BY-SA unless otherwise noted.