The Gruul Clans form the red/green guild from the plane and city of Ravnica. Introduced in Guildpact, the guild is also featured in Gatecrash and Ravnica Allegiance. 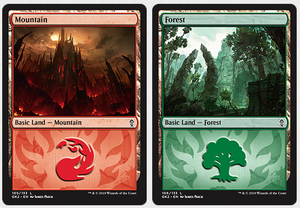 Before and for a short time after the signing of the Guildpact, the Gruul Clans were a wild and noble guild charged with maintaining the wild places on Ravnica. They were supposed to keep civilization in check. Civilization and the other nine guilds, however, overran every wild place on the plane. This changed the Gruul.[1]

As the wilds were torn down, so too were the Gruul's responsibilities taken from them. The Simic claimed jurisdiction over nature's future. The Selesnya preached about nature in order to bring it into its conclave. With their responsibilities taken over by others, they were seen as outside of the Guildpact and the Azorius began to write them out of the law. Outside the law, the Boros were not required to protect them and the Orzhov were free to enslave them.

The Gruul decentralized, lacking any sort of real leadership. The guild became nothing but a loose affiliation of clans. Exploited and ignored, they started to take any reason to cause chaos, any reason to destroy a symbol of civilization. Most Gruul hold contempt for those outside the Clans, referring to them as "cobble roaches".

It is common for Gruul clans to raid an area, destroy it just like the Rakdos, and live there until the resources gleaned from the destructive raid are used up. Once that happens, they move on to a new area, leaving smoldering ruins in their wake. They observe few consistent traditions but love to celebrate Rauck-Chauv, an irregular festival characterized by several days of rioting, feasting, looting, and destruction.

For a long time, Borborygmos was the largest and angriest of many large and angry clan leaders. He wasn't the official guildleader of the Gruul, as there is little official about the guild, but when he gave orders, the Gruul listened. As his orders were in line with the rage of the abused guild, they were happy to do so. With Bolas urging, the planeswalker Domri Rade challenged and defeated the aging Borborygmos by setting waves of beasts on the cyclops. Borborygmos wasn't killed, but he lost the Gruuls' respect. Currently, he is living as a Trog in the Rubblebelt.[2]

There is also Ulasht, the Hate Seed. Though it isn't a part of any clan, it is revered by many Gruul as a natural embodiment of pure destruction and mindless rage.

The rites of becoming Gruul, whether you have come from outside the guild or are marking your entrance into adulthood, centers around being buried alive.[3] When one enters the shallow grave, the person they were before is dead. Their past wrongs and errors are forgotten, but so are their past accomplishments. No matter how well you proved yourself in battle before, when you rise from the earth you are untested. The clan leaders recognize you only when you earn glory in battle as a Gruul.

There are seven Clans that currently make up the Gruul. New clans occasionally form under ambitious Gruul warlords, and meanwhile, other clans are occasionally challenged, defeated, and wiped out.

Besides the clans there are the solitary wandering Trogs, fierce independent warriors who traverse the rubblebelts as apex predators.[3]

The druids of the Old Ways believe that civilization will never be eradicated by scattered raids and petty skirmishes.[3] They cling to the idea of a coming apocalypse, the End-Raze, when Ilharg's hooves will trample every brick and stone of Ravnica's soaring skylines to rubble. The world will return to a state of nature in which the lawless code of muscle and savagery will reign once again. With the growing unrest between the guilds of Ravnica and the ascension of Domri Rade as guildleader, it was thought that the time of the End-Raze had come.

After the fight against the Dreadhorde in the War of the Spark, and the death of Domri Rade, Borborygmos became acting guildmaster again.[5] 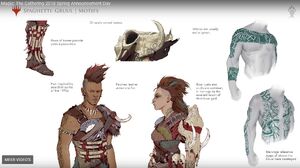 The Gruul as featured in Ravnica Allegiance

Creatures and races associated with the Gruul include the following:

Bloodrush from Gatecrash allows players to discard creature cards in order to give an attacking creature a temporary power/toughness boost equal to the power and toughness of the discarded creature card.

A creature with Riot enters the battlefield with its controller's choice of either a +1/+1 counter or haste.