Commodore Guff was a very old planeswalker that lived in a hidden library on Dominaria. This library contained every book ever written, including the books that held the destiny of the multiverse.

He joined Urza on his crusade against Phyrexia as one of the Nine Titans, even though he knew how Phyrexia would win. Bo Levar discovered Guff had this knowledge, and convinced him to change it. Guff apparently erased the important parts, since Phyrexia lost the invasion, but was killed by Yawgmoth in his death-cloud form in a matter of seconds.

J. Robert King, the writer of the Invasion cycle, based Guff on Scott McGough, the writer of several Magic novels and the leader of the Storyline Department at the time. Although some people found Guff quite amusing, others were annoyed by his constant breaking of the fourth wall. 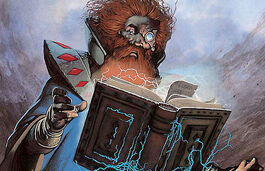