For a description of the separate guilds of Ravnica, see Ravnican guild.

Guilds of Ravnica is the 79th Magic expansion. It was released on October 5, 2018.[2] Officially, it is not part of a block. However, it is part of a series of three that is set on the same world, unofficially called the Guilds of Ravnica block.[3]

Guilds of Ravnica contains 259 cards (111 commons, 80 uncommons, 53 rares, and 15 mythic rares), but there are only 254 functionally different cards since all gates have 2 common slots. Boosters may include randomly inserted premium versions of any card. The name of the set is rather similar to the Ravnica: City of Guilds, but Wizards of the Coast doesn't perceive this as a problem.[4][5] The set features five of the bi-colored Ravnican guilds: Selesnya (

). Watermarks are used to better identify the guilds.[6] To get a guild watermark, the card has to be two-color, optimized with two colors or use the guild keyword.[7][8]

The 5 basic lands of this set are not included within the 259 cards, meaning that they won't appear in booster packs but only in the planeswalker decks and the Bundle.[9] They're all autumnal versions of the Richard Wright basics from Ravnica: City of Guilds and are numbered from #260/259 to #264/259. Neither contained in boosters are the 8 additional planeswalker deck exclusive cards - numbered #265/259 to #272/259 - and the Buy-a-Box promo, which has the number #273/259. Each Guildgate is featured in two common slots, each with different art, much like Wastes in Oath of the Gatewatch.[10][11] 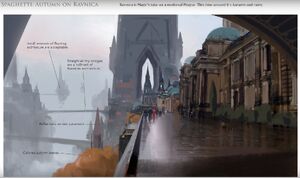 It is autumn on Ravnica. The story occurs mostly in darkness with shadows and moodiness, similar to a film noir. The story gears up for the final showdown with Nicol Bolas. He is trying to slowly influence Ravnica and warp it to his needs. The guilds fight internally between the forces pulling them toward or away from Bolas's influence.[12]

The cards that represent the Story Spotlights in Guilds of Ravnica are: Thousand-Year Storm (

). The story spotlight cards no longer tell you the order they occur in.[13] 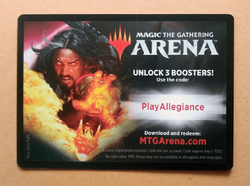 Guilds of Ravnica is sold in 16-card boosters (one card being a marketing card), two planeswalker decks and the Guilds of Ravnica bundle.[14] Building on how Theme Boosters for Dominaria performed, these 35-card booster packs with one rare or mythic rare card make another appearance. Of course, they are themed around the appropriate guilds and thus bi-colored.[15] The set is also accompanied by five special guild kits, preconstructed theme decks that combine cards from every Ravnica set released so far.

The boosters feature artwork of Emmara Tandris, Ral Zarek, Vraska, Aurelia, and a Dimir spy.[16][17] Every one in eight booster packs includes a code good for three packs in MTG Arena.[18] 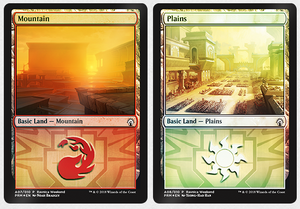 The sixteenth card in the boosters is a token card or an emblem, with advertisements on the back side. There are eight tokens and emblems in the set:[21]

Guilds of Ravnica Mythic Edition is a special draft-sized booster box, exclusively sold in the U.S and Canada. It contains eight masterpieces.

The expansion also features split cards. Each one focuses on a single guild, with a smallish hybrid mana effect as one half and a bigger, multicolor mana effect as the other.[23][24] The art of the rares focuses on the two major characters (legendary creatures or planeswalkers) in that guild, one personality per side. The card halves have alliterative names, starting with the same three letters.

Guilds of Ravnica has twelve cycles, two of which are reprints and one of which is printed twice within the set.

Guilds of Ravnica has one mirrored pair. 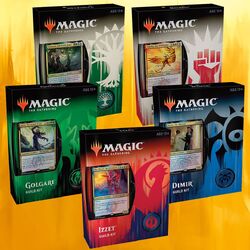