Jackal-headed Hazoret is the Amonkhet god of zeal. She was responsible for the final trial and slaughtered the winner with her spear, rewarding them with the God-Pharaoh's presence. After the Hour of Devastation she became known as the God-Survivor.[1]

In the time before Bolas corrupted Amonkhet, however, she represented compassion and inspiration.[3] 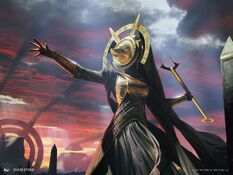 Under Bolas's thrall, she believes herself to be his daughter, and to have been made from the same magic as the Second Sun.[4] Bolas deceived the gods, though, making them believe he was the creator of Amonkhet, while the Second Sun is in fact natural to the plane.[5]

During the Hour of Devastation, Hazoret fought to protect the citizens of Naktamun, hoping that the God-Pharaoh would come and end the destruction. However, after Nicol Bolas's arrival, Bontu revealed that she had helped the dragon planeswalker conquer Amonkhet long ago, due to her ambition. Bolas ordered Bontu to defeat Hazoret. But after she brought the god of zeal before the God-Pharaoh, Bolas betrayed and killed Bontu. Hazoret now remains the only living god of Amonkhet.[6] After engaging the Scorpion God and being severely wounded, Hazoret managed to weaken its armor enough for Samut and the others to finish it off. After Samut planeswalked away from Amonkhet and then returned, Hazoret took the remaining survivors of Naktamun and went with them into the desert, swearing to protect them as long as she drew breath. For this, she became known as Hazoret, the God-Survivor and mother of the mortals of Amonkhet.[7] 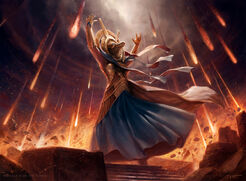 During the War of the Spark Hazoret had established a camp for the survivors near the ruins of Naktamun, which was protected from the Locust and Scarab Gods and their servants with a barrier similar in nature to the Hekma. She was visited by a group of planeswalkers seeking her help in the fight against Bolas. She spoke to Dack Fayden and told him that he was a better person than he thought and told him to face his destiny back on Ravnica. Hazoret lent her spear as a weapon to take down Bolas, which was immense and required multiple planeswalkers to wield. Karn was able to grasp the weapon and transport it to Ravnica where he and Angrath used it against Bolas's Dreadhorde. Later, the spear was used by Niv-Mizzet in the climactic battle with Nicol Bolas.[8]

Hazoret's canine form is likely inspired by Anubis, the Egyptian god of mummification and the afterlife; one of his epithets is tepy-dju-ef, "He who is upon his mountain". Her role in ending the life of the worthy draws parallels to Set, the Egyptian god of storms and the desert, who killed Osiris and thus allowed him to enter the afterlife. Her association with the sun and zeal for the God-Pharaoh might also invoke Sekhmet.

As the last untainted survivor of Amonkhet's original gods, and a solar deity, she might also resemble the Aten, a henotheistic/monotheistic solar deity worshiped as Egypt sole god in Akhenaten's time.