Heliod is the God of the Sun on Theros.

Heliod represents the law, justice, retribution, and the bonds of kinship. Heliod presides over matters of family honor, questions of morality and virtue, speeches, marriages, acts of protective bravery, dawn meals, and self-sacrifice. Heliod's name is often part of legal proceedings, and sacrifices to him are made in times when the greatest aid — or the strictest justice — is needed.

Heliod radiates with pride and self-assurance. His presence fills the sky with light, blocking mortal access to the dark, starry view of Nyx, and in person, he has the same overwhelming aura of awe and brilliance. He is convivial and gregarious, making friends and forming bonds easily, and he sees himself as an ally to all. But others know that Heliod can be fickle in his loyalty. Heliod's greatest ally today might be the target of his retribution tomorrow.

Over the course of the Godsend saga, Heliod demonstrates a strong capacity for arrogance. He styles himself as "the lord of the pantheon" and "the greatest of these gods of Theros", and demands praise from both mortals and other gods. This escalates into outright conflict with Purphoros, who challenges him in these assertions; this inevitably causes a schism in the pantheon, with most gods supporting one or other of them. This need for chronicle adoration also inevitably leads him to hate Xenagos, whom he accuses as "a usurper", and Elspeth, whom he feels an envy towards, and is part of the reasons why he murders her at the end of the saga, taunting her pettily before the killing blow.

It is implied that Heliod's personality, like most of the gods', changes in accordance to mortal beliefs.[1]

Heliod is the sun god, literally bringing the light of day to the world, so almost everyone on Theros pays at least token acknowledgment to him. Some families have a custom of winking in the direction of the dawn's light first thing in the morning, a gesture of respect to the sun god's luminous eye. Heliod's devoted worshipers are mainly humans and Lagonna Band centaurs, who worship Heliod on the first clear-skied morning of every month, although some Leonin are said to still worship him. Temples to Heliod often feature stairs up to a rooftop courtyard, enabling sun worship. The largest holiday aligned with Heliod is the summer solstice, celebrated with three days of ceremonious feasting, weddings, and oaths of loyalty. 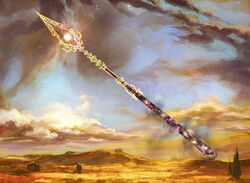 Heliod wielded Khrusor, the Sun Spear, a weapon blessed with his power that can be pitched down from the heavens to any point on Theros. Obscure legends say that Heliod smote the coastal city known as Arixmethes with Khrusor and cast it into the sea.

During her time in the Underworld, reliving her death every night, Elspeth was able to seize the shadow of Khrusor from her nightmares and bring it into the Underworld. In her escape from the Underworld, the Planeswalker found many opportunities to wield the Shadowspear. Victory after victory, she declared to onlookers that her spear was the real Khrusor and Heliod's was a fake. As the legend of Elspeth's spear grew, Khrusor's strength waned. When she finally battled Heliod at the gates of the Underworld, his spear shattered in his hands.

It was Heliod who armed Kytheon (later known as Gideon) and sent him after a Titan that Erebos had sent rampaging across Theros. This event led to the death of Kytheon's companions and his ascension as a planeswalker.

In the Theros Block storyline, Heliod is a key character, acting as a secondary antagonist to Xenagos' tomfoolery. In the first section of the storyline, his desire for praise and glory placed him in conflict with Purphoros, and while neither god could slay the other, they fought savagely. In the battle, Purphoros' weapon, a blade infused with chaos itself that could destroy Nyx, fell from the heavens and was taken by a frightened Elspeth. Years later, when Elspeth returned to Theros and tried to understand its gods by praying to the Sun, Heliod was displeased with her and tried to burn her alive with his rays to acquire her sword, but was prevented from doing so by her own power. Instead, he saw fit to make her his "champion", and converted the weapon into a spear called Godsend. Across the rest of the novel, his conflict with Purphoros escalated to a war among the pantheon, and Kruphix saw fit to prevent the gods from interacting with the mortals, in an act known as the "Silence".

When Xenagos achieved his apotheosis, Heliod was quick to blame Elspeth, and once again tried to kill her, and failed. Across the second part, his hatred and jealousy of Elspeth increased, and to make matters worse he came to understand what a Planeswalker was, fearing that she could rise to godhood like Xenagos and threaten his power. So he waited for the right chance and struck when Elspeth was exhausted after her final battle with Xenagos. He glared his blinding light, taking Godsend away from her and stabbing her with it, taunting her in a final desire to humiliate his own champion as she died. He gave her corpse to Ajani Goldmane, telling him to take her out of Nyx and let her soul be captured by Erebos, as she had previously agreed with the dark god to exchange her life for that of Daxos. With this, Heliod departed.

As the gods went to war against each other again, Heliod sought to become the sole god of the pantheon. At a great cost, he fully resurrected Daxos (previously a Returned) and made him a demigod, but at the expense of being Heliod's champion. As Elspeth escapes, she spread stories about her newly acquired weapon, the Shadowspear, that it was the true Khrusor. As her legend grew, Heliod's weapon became weaker and when the pair fought at the borders of the Underworld, Elspeth was able to overpower Heliod and shatter his spear. Erebos, pleased with the defeat of his long-time rival, allowed Elspeth to leave and chained Heliod into the Underworld beneath a giant boulder.[2][3]

Heliod is partially modeled after Zeus, leader of the Greek gods and god of the sky, law, and justice. He was also partially inspired by Helios and Alectrona, gods of the sun, and protection from evil. Though likely unintentional, it is also worth noting that the ancient Greeks sometimes perceived Helios as Zeus' eye,[4] so Heliod being derived from both makes sense.

His imprisonment in the Underworld may be a reference to Hyperion, the titan of light that was locked in Tartarus alongside his siblings. The specific method of torture is an allusion to Atlas and Sisyphus.