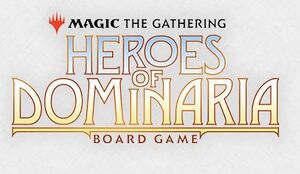 Heroes of Dominaria is an original Magic: the Gathering board game published by WizKids and Wizards of the Coast.[1] Originally slated to be released as the annex set of Dominaria in August 2018, it wasn't released until December 3, 2018.[2][3] A premium version, containing four painted miniatures also became available.[4][5][6] 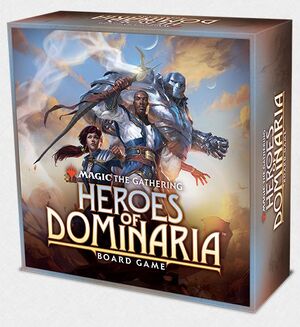 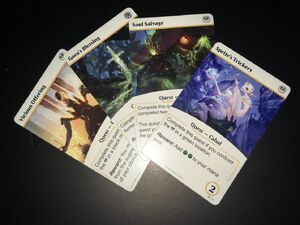 The game pulls from the original trading card lore.[7] Players will play as Planeswalkers (Jhoira, Karn, Teferi, or Chandra), exploring the landscape of Dominaria. As the player explores the ancient lands they create leylines to more mana. Using the mana, they power abilities and recruit heroes to aid in quests. They rediscover lost artifacts, and confront the sinister Cabal in order to gain the resources needed to save the multiverse before rival heroes do.[8][9]

The game is recommended for two to four players ages fourteen and up with a play time of 60–90 minutes.

The game board depicts the Domains, a rather vaguely-defined geographical region covering the continent of Aerona and the islands to its east.[11]