Story: Hour of Devastation is the second and smaller set of the Amonkhet block. The story revolves around the five prophecied Hours, which build up to the arrival of Nicol Bolas. It is revealed that Bolas came to Amonkhet once before, where he defeated the eight original gods and killed all of the plane's adults, leaving only infants to be educated according to his plan. Five of the gods were to have their memories shifted to become suitable mentors to the plane's inhabitants, while the other three gods were to become the cornerstone of Bolas's new army.

Hour of Devastation sees Nicol Bolas's plane to its conclusion. He arrives back on Amonkhet, defeats the five gods either by himself or by proxy (the other three gods), and his army of Eternals are released. It is revealed that the entire purpose of the Trails, which supposedly reward survivors with paradise, actually transform them into zombie soldiers bent to Bolas's will. These Eternals obliterate the defenders of the city once released, and the citizens of Amonkhet flee into the desert. The five planeswalkers of the Gatewatch stay and attempt to defeat Bolas, but each is defeated in turn.

Jace is the first to fall. Mind damaged by the elder dragon's telepathic might, he planeswalks blindly to Ixalan, leading to Explorers of Ixalan. He is followed by Liliana, who knows of the dragon's power and fears death most of all. Nissa is next, strangled by her own corrupted elementals and forced to flee. Chandra dies to Bolas's power at roughly the same point. Last is Gideon, who fights valiantly but is defeated when Bolas slices through the soldier's supposedly-inepenatrable golden aura.

With the planeswalkers defeated, Bolas turns to other matters. Tezzeret arrives and it is revealed that the purpose of the Interplanar Portal/Bridge is to transport large armies (of Eternals, in this case) from one plane to another, doing away with the pesky process of building a separate army on each plane the dragon wants to conquer. It is also revealed that Tezzeret and Bolas at least appear to be in league with Ral Zarek, although this is not certain as Zarek helps Jace numerous times counter to Tezzeret and Bolas's desires.

Hour of Devastation has critics of recent sets again angry at what they see to be the core problems of newer sets: Oversaturation, lack of R&D risktaking, and a heavy reliance on the Gatewatch narrative. Overprinting of Magic product in recent years has led to market oversaturation, devaluing the newer cards and leading to temporary high prices for standard only. Paired with R&D's caution in printing cards that will be too powerful for Standard, few of these cards then  see play in other formats, especially Modern.  The Gatewatch narrative is particularly annoying to older players, as it seems to fall to superhero tropes, something that is confirmed by the half-baked writing within weekly Magic Story Articles. Mark Rosewater has spoken to many of these concerns, and it appears that most of them may be due to the transitioning state of R&D. The new arrangement and planning of R&D for Large/Large/Large/Core happened two years prior to Rivals but due to how far in advance sets are planned, it won't be evident until Ixalan is finished. 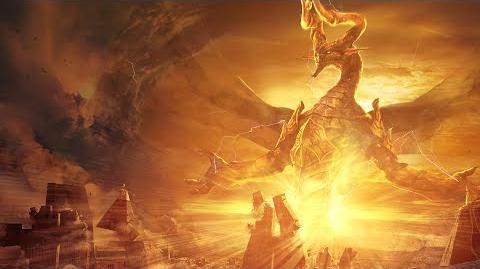 Retrieved from "https://mtg.fandom.com/wiki/Hour_of_Devastation?oldid=74123"
Community content is available under CC-BY-SA unless otherwise noted.