House Dimir is the blue/black guild from the plane and city of Ravnica. Introduced in Ravnica: City of Guilds, the guild is also featured in Return to Ravnica and Guilds of Ravnica.[1] 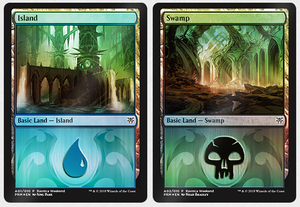 House Dimir is a guild of secrecy, manipulation and underhanded deals, a shadowy organization operating behind the scenes to twist Ravnica to its own ends.[2][3][4] The guild provides espionage, smuggling, burglary, counter-intelligence, assassination and other illegal services for the Ravnican populace, although its patrons are unaware that they are in fact employing the guild, instead thinking they are employing guildless mercenaries or another guild such as the Rakdos. The guild is so secretive that even its own agents often do not know who they truly work for.

House Dimir was founded by the ancient vampire Szadek. The vampire was one of the ten paruns who signed the Guildpact and remained in charge of the guild for the subsequent 10,000 years. One of the crucial clauses of the Guildpact was that none of the signatories (including Szadek) could reveal the existence of the Dimir to Ravnica's people, protecting the guild's anonymity while forcing it to remain hidden. This created a flaw in the Guildpact's structure that would eventually allow it to be broken.

For a long time, the guild officially didn't exist. The Ravnican people generally believed that there were only nine guilds and that if there ever was a tenth, it had dissolved thousands of years ago. The name Dimir was not known by most people and those that did know it believed it to be a myth, children's story or a paranoid conspiracy theory. This misinformation was actively propagated by the Dimir themselves as a method for avoiding suspicion. The Guildpact's spell was finally broken when Agrus Kos arrested Szadek, which exposed him and House Dimir to the public.

The guild operates on a strictly need-to-know basis on three levels: the overt face of the guild that the general public is allowed to see, the covert inner guild that Ravnicans suspect exists, but rarely see, and a deeper, clandestine level that is hidden even from its own members.[5] At the top of its hierarchy is the leader. Only he is fully aware of all of the guild's activities. Beneath him are the necrosages, who oversee the guild's activities from Duskmantle. They manipulate the flow of information, keeping the guild informed on all things whilst keeping the rest of the plane ignorant. Few individuals are ever allowed to meet the guild's leaders, as instead a network of middlemen are employed to pass on messages to cells of field operatives. Agents at the very bottom of the guild only meet a mysterious individual in a back alley that gives them some basic information on their target and nothing else. The public face of the guild is represented by couriers, librarians, investigators, media reporters and archivists.

The Dimir's guildmages use their magic to influence the minds of others. They can send messages to operatives over distances or strike people with amnesia, magically alter memories or even perform lobotomies on victims to cover their tracks. The Dimir also practice necromancy, creating undead minions such as skeletons and wights to carry out missions. Such minions are employed as they are single-minded, easy to create and dispose of, cannot be interrogated in the event of capture and are easily blamed on the Golgari instead. Spirits are also used by the Dimir to pass on messages, carry out surveillance invisibly or even to possess important figures such as judges and senators. Nobody is beyond the reach of House Dimir. 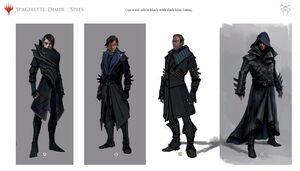 The Dimir as featured in Guilds of Ravnica

Szadek as leader of House Dimir is the main antagonist of the Ravnica novel, manipulating Savra and the Selesnya Conclave to do his bidding and kill Mat'Selesnya. He is ultimately defeated when Jarad takes control of the lupus and forces them to attack him. After that, he is arrested by Agrus Kos, and imprisoned by the Azorius who secretly execute him.

After the events of the Dissension novel, a new Guildpact is formed that does not recognize the House Dimir as an official guild. However, the district of Agyrem reappeared within Ravnica, and is under Szadek's (now a spirit) control (he can easily control the other spirits that inhabit it), which means that the guild is still operational and possibly, stronger than ever.

Although not officially recognized as a guild under Teysa Karlov's non-magical Guildpact, House Dimir is still active under Lazav's leadership. The fact that the general populace now knows of their existence required adopting a public face, so the lower ranking members serve as couriers, investigators, reporters, and archivists.[6][7]

The true power of the guild still lies in the network of spies, assassins, and thieves.

Lazav came to suspect that something was undermining the guilds, and actively sought to uncover its source.[8] The Dimir were an organization of powerful agents led by a master strategist, and their world was being threatened by an organization of even more powerful agents led by an even more brilliant strategist. Bolas represented a direct threat to House Dimir's existence by rendering all its scheming obsolete.[5] Lazav managed to find and kill the infiltrators in his guild.[9] Afterward he attended the guild summit where he pledged his guild to the alliance that planned to oppose Bolas.[10]

Lazav actively participated in the War of the Spark. With Chandra Nalaar, Saheeli Rai, and the Azorius arrester Lavinia , he was sent to shut off the Immortal Sun, which was guarded by Dovin Baan.[11] Lazav disguised himself as Chandra, which allowed the real Chandra to disable the Immortal Sun. Lazav defeated Dovin and left him blinded, forcing him to planeswalk away.

Along with the other guildmasters, Lazav participated in a ritual led by Nissa to resurrect Niv-Mizzet and grant him the power of the Living Guildpact.

The Dimir game mechanic is Transmute: it allows a player to pay the transmute cost of a given card, discard it and search their library for a card with the same converted mana cost as the discarded card.[12][13]

The Dimir game mechanic in Gatecrash is Cipher, which allows a player to encode a cast spell on a creature, casting a copy of it for free each time the creature deals combat damage to an enemy player. Another mechanic frequently appearing on this guild's cards is milling, which allows a player to win the game by removing cards from their opponent's library. A special variant of mill called Grind appears on many Dimir cards in the Return to Ravnica block.[14] While Magic is set up so there is a large amount of hidden information at any given time, there are always ways to use an inequity in that information to your advantage — a specialty of the Dimir.[15]

The Dimir mechanic in Guilds of Ravnica is Surveil.[16] Surveil is similar to scry, in that it allows the player to look at a number of cards from the top of their library and organize them. However, rather than putting cards on the bottom of the library like scry, it puts cards in the graveyard.

Species and races associated with House Dimir include:

Classes associated with House Dimir include: