Immersturm is one of the ten realms of the plane of Kaldheim.[1]

Immersturm is a land of fire, demons, vampiric dragons and constant warfare. As lightning crashes in the sky, demonic raiders sail flaming ships across burning seas, scouring the realm for routes into other realms they can pillage. The gods have placed powerful runic wards around Immersturm to keep the demons trapped and prevent them from causing havoc elsewhere, but the wards aren't perfect, and it's only a matter of time until the demons find another way out.[2] 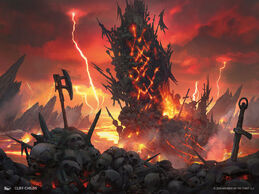 Immersturm never stops burning. The seas are made of fire, and the sky is lit by a perpetual lightning storm. The demons inhabit a bleak, mountainous landmass made of sharp, unforgiving black rock and pitted with burning craters. Noxious fumes, toxic to all but demons, emit from the cracks and billow into the sky. There is no vegetation in Immersturm. The only wild "animals" are beasts formed of elemental flame that spring from pits of fire.[2]

Rival demon jarls come to battle each other on the bloodstained Fields of Elskul. Since the demons can't leave Immersturm, they have only each other to fight, and their insatiable bloodlust means that a massive battle is constantly raging on the black battlefields, day and night. Few combatants have any reason for fighting or any grudge against other demons; they simply battle for the battle's own sake.[2]

The Bloodcrag is a volcano deep in the black mountains of Immersturm. No lava bubbles in its caldera—instead, it seethes with blood, for the Bloodcrag is the source of all demons. Every time a demon slaughters a non-demonic creature, the victim's blood is magically transferred to the Bloodcrag. When the seething gore of the demons' conquests reaches the lip of the caldera, a new demon emerges. However, the runic wards that trap the demons in this realm make new victims scarce, and no new demons have emerged from the Bloodcrag in many years.[2]

When demon raiders have managed to plunder other realms, they deposited their spoils in the underground Vaults of Hellir. Artifacts from ancient civilizations and arcane secrets lost for generations have been gathering dust for centuries in the labyrinthine chambers below the burning seas.[2]

The Einir (the gods who birthed the elven race) sealed the demons into Immersturm using powerful magical objects of their own design. When the Skoti challenged the Einir's supremacy and defeated them, these relics were lost. The Skoti used runic magic to reseal Immersturm, but they have been less than vigilant about maintaining the safeguards.[2]

On Immersturm, the planeswalkers Kaya and Tyvar Kell were unable to prevent the devilish Tibalt from creating a Doomskar. Lead by Varragoth, thousands of demons streamed through a giant rift in space to attack another realm.[3] 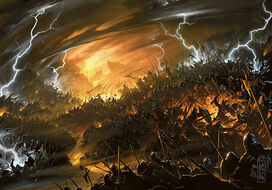 For Planechase, Immersturm was initially conceptualized as part of the plane Valla. However, it has since been revealed as one of Kaldheim's realms. According to Ethan Fleischer, Valla still exists. It was originally part of Kaldheim incorporating the realm of Immersturm, before splitting off. Now there is an Immersturm on Kaldheim and Valla exists as a separate plane with an Immersturm region remnant.[4]