For other uses, see Innistrad (disambiguation).

Innistrad is the first set in the Innistrad block. It is the 56th Magic expansion and was released on September 30, 2011.

Innistrad is a top-down-designed Magic set,[2][3] meaning that it was designed and developed with flavor in mind first, "molding mechanics to fit the concept".[4] The expansion symbol of the set is a depiction of two outward-facing, overlapping, stylized herons.[5]

Innistrad has a gothic horror theme and makes use of horror tropes. It is the first set to thematically take place on the plane of Innistrad. The set features graveyard [6] and tribal mechanics, with the five main tribes each being split over an allied color pair.[7][8] Spirits primarily in white and blue, Zombies in blue and black, Vampires in black and red, Werewolves in red and green, and Humans primarily in green and white. In each of these pairs, the second color is considered the primary. There are also slight thematic differences between the tribes depending on the color, such as blue zombies being abominations of science in the vein of Frankenstein's Monster, while black Zombies are shambling corpses reanimated by magical spells.

Innistrad contains 264 cards (15 basic lands, 107 commons, 67 uncommons, 59 rares, 16 mythic rares), including randomly inserted premium versions of all cards in the set.[9] This is 15 more cards than any large expansion in recent history had. Innistrad also features a number of double-faced cards which have a card frame printed on each side; to handle these when playing without sleeves, three in every four booster packs include a checklist card instead of a basic land. Due to basic lands becoming more rare, Innistrad only contains three basic land artworks rather than the usual four, further enlarging the number of functionally different cards.[10]

The double-faced cards were printed on a separate sheet than the other cards in the set, and every booster pack includes a double-faced card. This means that boosters can have two rares and/or mythic rares without either being foil.[11]

Innistrad is a plane of menace and dread where every creature hides a darker aspect. Here, hedonistic vampires stalk the shadows to quench their thirst, and the full moon can transform a simple villager into a savage werewolf.[13][14][15][16][17][18][19][20] 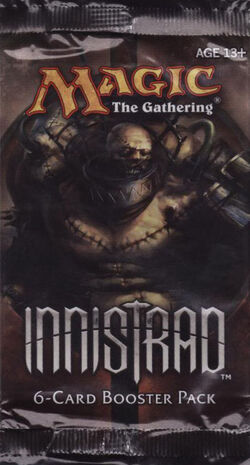 Innistrad was introduced by way of an alternate reality game, in which bits of story were leaked in the form of various letters, journal entries and other in-world correspondences.[23][24] The prerelease of the set was September 24–25, 2011,[25] the launch party on September 30–October 3, 2011, the Magic Online release was October 17, 2011 and the Game Day was October 29–30, 2011. The prerelease promo was the double faced Mayor of Avabruck / Howlpack Alpha[26]; the launch party promo was Ludevic's Test Subject / Ludevic's Abomination[27]; and the Game Day promo was a full-art Diregraf Ghoul, with the top 8 receiving a full-art foil Elite Inquisitor.[28] The Buy-a-Box card was Devil's Play.[26]

Regular boosters of Innistrad come with a bonus sixteenth card that is either a checklist card, a creature token or rules card with an advertisement on the reverse side.

The Innistrad tokens in numerical order are:[29] 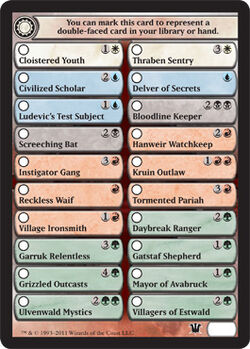 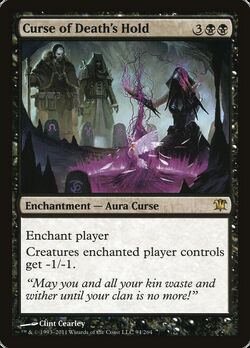 Card with the subtype Curse

Innistrad also introduces a new subtype for Enchantments named "Curse", which are simply Auras which enchant players and have a detrimental effect. The set is partially graveyard-based and features the return of flashback which originated in Odyssey and was reprinted during Time Spiral block. It also introduces the keyword action Fight, which represents the ability of Arena or Tahngarth, Talruum Hero. Two creatures that fight deal damage equal to their power to each other. Innistrad also features the new ability word Morbid in which creatures get benefits if another creature died the turn they entered the battlefield.[33][34]

The set makes use of tribal mechanics, with Vampires, Zombies, Werewolves, Spirits and Humans giving bonuses to each other and have abilities that work against other tribes. A small theme of using +1/+1 counters is also used in the set, particularly with Vampires growing stronger by dealing damage. References to the number 13 are sprinkled throughout Innistrad cards. Another minor theme in Innistrad is Equipment used by humans to fight the monsters.

In general, Innistrad is often considered one of the best sets in Magic history. The combination of a perfect limited experience, extremely powerful and varied cards for standard in all rarities and the large number of cards used for eternal formats has received universal acclaim from magic players. The only sets that come close to the popularity of this set are Ravnica: City of Guilds and Zendikar.