The Introductory Two-Player Set was a Magic box set released at the end of 1996 (exact date unknown), as the European and Asian adaptation of the US Rivals Quick Start Set.[1] 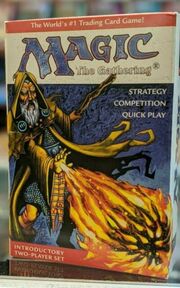 This 2-Player Starter Set was released in English, French, German, Italian, Japanese and Spanish. The Japanese edition slightly differs in design and contents. The English version is also available with Dutch rules. Furthermore, there are two different editions, the regular box set and the Gift Box with additional contents. All the Introductory Two-Player Sets were printed in Belgium by Carta Mundi. The cards look similar to Fourth Edition cards, but feature a 1996 copyright date and in some cases reformatted rules text. 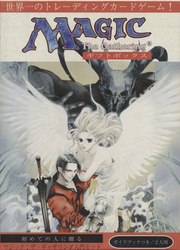 Decklist are the same as in the Rivals Quick Start Set, except adding four cards to each second deck (the only new card being Phantom Monster).

The additional cards compared to the Rivals Quick Start Set were: 1 Mountain, 1 Mons's Goblin Raiders, 1 Phantom Monster and 1 Power Sink. One of the Islands was replaced with a different illustration.