Ixalan contains 279 cards (20 basic land, 101 common, 80 uncommon, 63 rare, and 15 mythic rare) and includes randomly inserted premium versions of all cards.[5] Ten additional cards are found in the set's planeswalker decks (2 mythic planeswalkers, 2 rares, 2 uncommons, 2 commons, and 2 common dual lands). These are numbered #280/279 to #289/279.[6] Ten of the rares are double-faced cards which were printed on a separate print sheet. These appear in the rare/mythic slot of booster packs, which changes the mythic rare to rare ratio from 15:106 to 15:126.[7][8] A checklist card replaces the basic land in some boosters.[9][10] Five of the basic lands depict a lost Jace Beleren.[6]

A complete Ixalan rare foil print sheet was leaked three months before prerelease, which caused Wizards of the Coast to re-evaluate their preview plan.[11][12]

Starting with this set, all planeswalkers past, present, and future have the supertype legendary.[14] They are subject to the "legend rule" instead of the "planeswalker uniqueness rule", which was removed from the game.

This is a story about desire. It is desire for power, desire for companionship, desire for approval, desire for discovery, and everyone is racing to get what they want first.[15] For centuries, the untamed jungles of Ixalan have hidden a coveted secret: Orazca, the city of gold, which houses a mysterious artifact, the Immortal Sun. But no secret can remain undiscovered, and no treasure can be taken uncontested.[16] The dinosaur riding warriors of the Sun Empire and the merfolk shamans of the rival River Heralds are met by the vampire conquistadores of the Legion of Dusk and the pirates of the Brazen Coalition.[15][17]

Vraska poses as a pirate on the high seas, while Jace Beleren is stranded on the plane with loss of all his memories.

Ixalan is sold in 16-card boosters (one card being a marketing card), two planeswalker decks, the Ixalan bundle, Booster Battle Packs and a Deck Builder's Toolkit.[6][18]

As part of the preview season, Wizards of the Coast distributed trackable game pieces to stores, fans, volunteers, and some well-known community folk. As game pieces travelled from from geochache to geocache, the distances they travelled influenced the release of preview cards.[17] 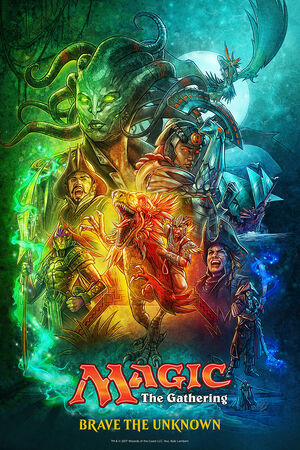 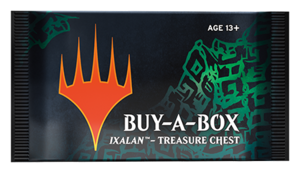 Ixalan is a tribal set, with Pirates (

).[28][29][30][31] This is the first time Magic has an uneven color distribution of factions within a set. Though the tribes are asymmetrical, the colors are not. Each color has two tribes. The fact that Pirates and Dinosaurs both need more cards to become tribes properly (as compared to merfolk and vampires, who are already pretty established) was a factor in them becoming the two 3 color factions.[32][33][34][35][36] The two colour pairs that are not represented in this scheme -

- do not have multicoloured signpost uncommons, but have explore and fliers as a theme respectively.

Raid returns from Khans of Tarkir (now connected to Pirates), Crew from Kaladesh (connected to the ships from Torrezon), and Transform from Innistrad (the double-faced cards now highlighting the tales and tools of discovery).[14][37] The DFCs all have a land on the "back" face cards, which features a map-inspired card frame. The front face is recognized by the icon of a compass rose

and the back face is marked by the land icon

There are two new named mechanics:

The Merfolk make use strategy revolves around being very difficult to block and growing via +1/+1 counters, while Vampires use life as a resource.[14] 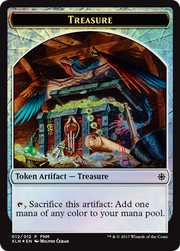 Ixalan introduces the treasure artifact subtype and the return of the dinosaur creature type.[38] The trilobite creature type is new.

Vehicles are back from the Kaladesh block in the form of ships.

Ixalan has seven cycles, one of which is reprinted. Notably, three of these cycles are partial, due to the uneven distribution of colors among the set's tribes.

Some cards represent a specific pirate fleet, four fleets are revealed this way, each one showing its method :