Ixalan is a Mesoamerican-inspired[2] plane full of uncharted jungles where dangerous beasts, magnificent ruins, and lost treasures lie waiting to be discovered.

On this plane, the planeswalker Azor created a powerful artifact, known as the Immortal Sun, in order to trap the evil Nicol Bolas. For this reason, Planeswalkers could enter Ixalan, but until recently could not leave.

The Immortal Sun was once guarded by holy custodians in a mountaintop monastery on the continent of Torrezon. Its presence gave the local monarch a disproportionate amount of influence in regional matters. The monastery fell under attack by the forces by rival king Pedron the Wicked who stole the Immortal Sun but in turn lost it to an unidentified winged being.[3] Eight hundred years ago, the mountainous nation called Torrezon (it later gave its name to the whole continent) split into three parts when its monarch died, with each portion ruled by one of the monarch's children.[3] A long religious war ensued. It raged on for three centuries, before the first vampire, Elenda of Garrano, ended it. After the unification, many of Torrezon's nobles undertook Elenda's transformative ritual, and it became known as the Rite of Redemption by the church. The united Legion of Dusk began a series of wars and eventually took over the whole continent. When the last city-states were conquered, its inhabitants took to the sea and formed the Brazen Coalition.

On the continent of Ixalan, the River Heralds were once the dominant inhabitants of Ixalan with a large power of their own, and their strength was once enough to keep the Sun Empire out of the interior. The Sun Empire was first founded from Orazca by Chacanto Intli, who united the various city-states into a central empire.[4] Following a devastating war with the River Heralds under Apatzec Intli I, who had gained possession of the Immortal Sun and used it without restraint, their civilization was reduced to a few coastal cities, with Orazca being lost to them. The empire still confronted the Heralds on its borders. The latest emperor, Apatzec Intli III asserted control, and is expanding again.

The Sun Empire recently was besieged by pirate raids by the Brazen Coalition and the advance of the Legion of Dusk which is seeking the Immortal Sun. All factions close in on the Lost City of Orazca, which is said to hide the ancient artifact. The Immortal Sun was found by several of the factions, but then was stolen and removed from the plane by a henchman of Bolas. The barrier was now broken and several planeswalkers left the plane. Meanwhile, in a level playing field, the Sun Empire seemed to take control of the continent of Ixalan, and was hungrily eying Torrezon.[5] 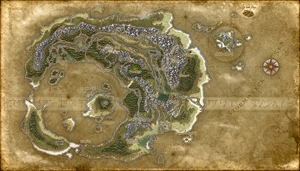 Map of the continent of Ixalan

Ixalan has at least two large continents that are separated by the sea. Further north, travelers meet only unmelting ice.[6]

The Stormwreck Sea is the home to numerous pirates. 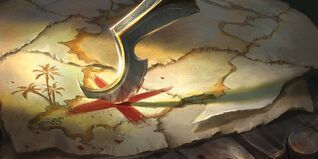 Ixalan, the western continent, bears the same name as the plane (or the other way around[5]). Covered in vast jungles and rivers. It is home to large dinosaurs, that some of the natives managed to domesticate, and numerous secrets hidden within the forests.

Torrezon is the eastern continent. Ruled by an alliance between a powerful church and an iron-fisted monarch. Vampires dominate the continent after a series of wars with other realms. Refugees and exiles from the defeated nations fled to the sea and established the Brazen Coalition.

Luneau is an island kingdom under the influence of the Legion of Dusk.[8]

Ixalan is home to a vast array of dinosaurs.

Besides by the mesoamerican civilizations, Ixalan is inspired by the Age of Discovery and Piracy when legends such as El Dorado were created. A lot of what inspires both the Sun Empire and the River Heralds comes directly from the Maya and Aztec and the succession of control from one to the other.[9] Another source is the Lost world trope.[10]