The Izzet League is a blue/red guild from the plane and city of Ravnica.[2] Introduced in Guildpact, the guild is also featured in Return to Ravnica, the Izzet vs. Golgari set[3] and Guilds of Ravnica. 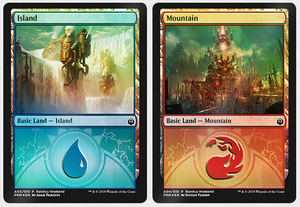 The Izzet League are charged with attending to Ravnican civic works,[4] including water supply systems, sewers, heating systems, boilers, and roadways.[5][6] In addition to carrying out these functions, the Izzet members — obsessive, keen, and creative intellectuals, who often have short attention spans [7] — are known to perform magical experiments, ever with reckless abandon and sometimes with spectacular but severe results.[4][8][9] Unlike the other guilds, the Izzet do not openly strive for hegemony of the city and the plane. Instead, integral to the Izzet League, a guild of masters of both theoretical and applied science and spellcraft, is the passionate seeking of, and thirst for, knowledge.[10] Combined with their drive for discovery and child-like curiosity, the brilliant but capricious and whimsical Izzet magewrights jump to and from ideas as they see fit, discarding old ideas for new ones that attract their attention.[4] In this regard, they can be likened to ambivalent or benevolent mad and absent-minded scientists/professors.[11]

An Izzet mage from the Wizards of the Coast Guildpact Style Guide.

The brilliant of Ravnica flock to Niv-Mizzet, the most intelligent being on Ravnica.[13] Powerful enough to live to tell the tale of his fight against the nephilim[14] and capable of seizing control of the city and plane of Ravnica,[15] Niv-Mizzet is content with not taking over Ravnica, in large part due to his fickleness and odium for monotony, as ruling and running Ravnica would become tedious.[13]

Although varieties of dragon-kin, such as drakes, wyverns, and wurms, are present in Ravnica, Niv-Mizzet is said to be the last true dragon.[15] As would be reasonably expected of him due to his vanity, Niv-Mizzet has numerous lesser clones of himself; other than as his underlings, the full purpose of these dragon clones, however, remains unknown.[15] Testimonies to the significance as well as vanity of Niv-Mizzet are reflected in the uniforms of Izzet League members and the names of inventions or structures, such as Mizzium, a metal invented by Niv-Mizzet; Nivix, the guild hall of the Izzet League;[16] and Izzet, the name of the guild itself.[13][17] The alchemically-boosted clothing of the Izzet are flamboyant, with bright fabrics dyed in the colors of their draconic leader's scales and shiny metals.[2]

Niv-Mizzet is conducting a scattered, grand meta-project he calls the Interlocus.[18] The purpose of the Interlocus—and indeed, its existence at all—is difficult to detect, as the sheer range and number of experiments that feed into it would fail to suggest any kind of pattern to most observers.

The servants of Niv-Mizzet who make up his personal court are referred to as the Izmundi.[18] Niv-Mizzet uses them to guide his machinations and to keep him abreast of the happenings in the wider world. The Izmagnus are the most powerful members of the Izmundi court, and form a smaller board with five to seven members (some members' identities remain secret) who serve as Niv-Mizzet's closest advisors. Even members of the Izmagnus are not privy to Niv-Mizzet's highest-level plans and goals.

Ral Zarek is a blue and red-aligned planeswalker, born to the city plane of Ravnica and a high ranking guildmage to the Izzet League. During his ascension, he thought to have managed to hide this fact from Niv-Mizzet, a very impressive task. Ral is the chief researcher investigating the ancient codes laid out in the Tenth District, the leylines and secrets that make up the Implicit Maze that so fascinates Niv-Mizzet. Ral then takes the role as the Izzet's maze runner after killing Melek.

The Izzet chemisters are alchemists who forge mizzium and other elements into arcane tools.[18] They experiment with new alloys, energies, and runic markings. The chemisters are highly competitive, which often leads to spirited rivalries and petty in-fighting. Blastseekers are Izzet mages who wield and control the arcane tools devised by the chemisters. Sometimes the blastseekers manipulate orbs of elemental energy that float in mutual orbits, crackling concentric disks of power, or streams of lava-bubbling water. Izzet blastseekers and chemisters might have up to forty attendants, most of whom are vedalken, due to their natural focus and organizational skills. Mech-mages make use of all sorts of inventions and artifacts.

The Izzet League is organized into units designated as laboratories that specialize in certain fields of research.[19] Though they all operate under the general guidance of the lzmundi, each laboratory is typically left alone to conduct its research.

Supposedly created during the Katazar-Razblat Elemental Symposium, weirds are the semi-sentient, walking-paradox result of a fusion of elementals of opposing elements, of fire and water and of earth and electricity.[17] Weirds are a creature type unique to the Izzet League, and function as ubiquitous lab assistants and "pets" of Izzet League members.[17]

The Firemind is an extrasensory link with Niv-Mizzet's consciousness and omniscience, between selected, worthy Izzet League subordinates, Crixizix being one, and Niv-Mizzet himself.[15] Members of the Izzet League who are deemed worthy must first pass a test before they may communicate with Niv-Mizzet.[15]

Founded by parun Niv-Mizzet, an ancient, brilliant, capricious, and narcissistic dragon, the Izzet League continuously create and destroy and are obsessively driven by a desire for new discoveries.[1] Being the analogue of scientists and engineers on Ravnica and the masters of innovation and spellcraft, the Izzet are also responsible for the design and implementation of most of Ravnica's infrastructure and inventions.[20]

Introduced in the Magic storyline in the novel Guildpact, the Izzet League are depicted as passionate thinkers, largely via the viewpoint of Crix (later Crixizix),[21] a goblin courier who initially serves under a magelord Zomaj Hauc but is later chosen, and promoted, by Niv-Mizzet.[15]

After fighting with the nephilim, Niv-Mizzet was not seen for a while. Former guildmages wondered what use this new-found freedom could mean for the Izzet, but without word from their guildmaster, the Izzet League became scattered and chaotic.[14]

Most Ravnicans saw the disappearance of Niv-Mizzet as the end of the Izzet guild. It wasn't until the emergence of large Izzet works being built and strange warehouses humming with manacoils throughout the night that the Ravnicans began to change their presumptions. The ancient dragon parun didn't have to be visible to control his guild. During his absence, he used the power of the Firemind to reach out to his guildmages with a complex array of new and mysterious projects for the Izzet League to work on.[14]

Lately, the Izmundi have been demanding more significant discoveries and faster results, so much so that chemisters have resorted to running experiments day and night for fear of losing their labs.[22] All their efforts are leading to one outcome: the development of superweapons.[23]

Niv-Mizzet knows about other planes and planeswalkers and has figured out that a threat to Ravnica is coming. He has started an experiment that should remove the Guildpact and let him empower himself, but he needs the help of the other guilds to pull it off.[23] To work on his research he has headed away from the main part of the city and has left Ral Zarek behind as acting guildleader.[24] Zarek initially appeared to be secretly in league with Nicol Bolas but later refused offers of service as relayed through Tezzeret.[25][26] After an intruder infiltrated Nivix, the Firemind revealed to Zarek that he had been aware of Ral's little secrets all along.[26]

When he failed to acquire the power of the Living Guildpact from the Interlocus, Niv-Mizzet was forced to fight Bolas on his own merits. The battle was brief, leaving only Niv's charred bones behind; however, the Firemind had been preparing for this. Zarek's role as guildmaster was confirmed by Bolas, but Ral continued to fight the elder dragon by carrying out the final orders of the Firemind. In the War of the Spark, Zarek's role was pivotal in enlisting the help from the other guilds to fight the Dreadhorde and to resurrect Niv-Mizzet as the Living Guildpact.[27]

Designed as "polycast" and with the Izzet League's in-game identity being one heavily oriented around instant and sorcery spells, replicate is a static and triggered ability that allows a card's controller to copy a spell with replicate as many times as the card's replicate cost was paid.[28]

Inspired by Ken Nagle's The Great Designer Search Radiate-inspired Dispersion mechanic,[29] like Replicate, Overload is a static ability solely featured on instant and sorcery spells. Unlike Replicate, however, it enables its controller to play a spell with Overload for its Overload cost to change the range of a spell from a single target to each possible target. Issues in designing and developing cards with Overload included the rarity of the cards, the playability of both sides of the cards, and the guaranteeing of a one-sided effect, without inadvertent side-effects.[30]

A keyword ability on instants and sorceries that allows the player to play the spell directly from their graveyard for the additional cost of discarding a card.

Species and races associated with the Izzet League include:

Classes associated with the Izzet League include: