The Devkarin Elf Lich Jarad vod Savo, or simply Jarad, was a former guild leader of the Golgari Swarm on Ravnica.[1]

Jarad was a bounty hunter who worked extensively in the Undercity of Ravnica. His sister Savra was the matka of the Devkarin elves, and unbeknownst to him, the servant of Szadek. When her ambitions brought her to control Svogthir to upset the current guild balance, he found himself opposed to his twin. Allied with Agrus Kos and Fonn Zunich, he was instrumental in upsetting Szadek's coup at the decamillenial Festival of the Guildpact. After his sister's death in those events, he took control of the Golgari Swarm.

He briefly married Fonn and fathered a child named Myc, however their obligations to their respective guilds and differences in their beliefs of how their child should be raised led to their separation. When Kos died, he acted as one of the pallbearers at his friend's funeral.

He was ultimately killed by Izolda in a Rakdos ritual trying to rescue his child who had been kidnapped to fuel the ritual. Thanks to his intervention, Myc's life was saved, but Jarad died shortly after. However, being versed in necromancy, though not as proficiently as his deceased sister, he managed to possess his own corpse. He remained the Golgari guildmaster. 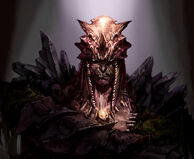 In the period leading up to the War of the Spark, the Cilia isolated Jarad in a sparsely populated corner of the Undercity. Pleased with the planeswalker Vraska's role in securing the Immortal Sun, Nicol Bolas rewarded her with the information where Jarad was to be found.[2] As the leader of the disenfranchised among the Golgari, she vowed to bring justice to Jarad and replace him with a worthier guild leader: herself.

With the help of the troll Jarga, and the kraul Mazirek and Xeddick, Vraska found Jarad in the Devkarin rot farms.[3] While the Cilia elves tried to save Jarad, the Erstwhile lich Storrev betrayed him. After Xeddick had extracted all of Jarad's dirty secrets from his mind, Vraska petrified him.