Jared Carthalion, also known as the Shadow Mage, was the end of the long and illustrious Carthalion lineage, dating back far into the Ice Age. He was a planeswalker and bore the crescent moon Mark of the Elder Druid on his cheek.[1] 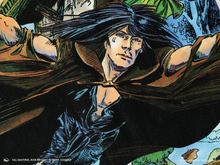 Jared's father, Adam Carthalion, wanted to save Dominaria from a terrible danger that had been foretold. In pursuit of this, Ravidel talked Adam into a quest to become a planeswalker. He even sacrificed his wife, Gwendolyn Carthalion, to Ravidel to achieve this, not knowing that Ravidel was the danger he wanted to destroy. Finally, when Ravidel asked Adam to sacrifice Jared, he refused and battled the planeswalker. Jared was hit by a syphon soul in this battle, and his appearance was altered so that nobody recognized him as the rightful heir of the Carthalion line.

Jared grew up a beggar on the streets of Arathoxia, brought up by his father's spellsquire Ezer.

Sixteen years later Ravidel tracked Jared down and conquered Arathoxia. Jared summoned Eusomoné to fight off Ravidel's giant spider; when Ezer grew sick, he met the Mistress of House Scarlet who gave him a potion to save Ezer and showed him the Black Lotus. Jared stole the Lotus and met Liana of Minorad, who later saved him from Ravidel. Jared led Yorgo and other refugees from Arathoxia against Ravidel at Castle Melmereth, using a Fellwar Stone and a magic scroll to get inside. Using the Black Lotus, he summoned a Shivan Dragon, which appeared to kill Ravidel, and destroyed Castle Melmereth. 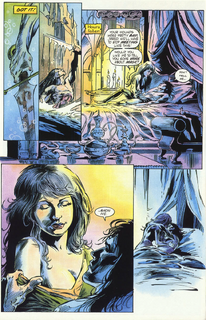 He left Liana to become a Wayfarer. After having trouble in Hamath with Visionary Kadesha and Élan d'Avenant, he was taken by Kristina of the Woods, who began to teach him to use all aspects of mana. They eventually fell in love, soon after his sixteenth birthday.

Jared and Kristina learned from the Great Spirit in the White Woods that Ravidel was alive, and they moved to oppose him. Jared watched as Ravidel and Liana dueled, accidentally summoned Élan into the battle, resulting in Liana's death. He escaped with the Moxes and Kristina on the Shivan Dragon and headed for Corundis, where he found the two long-daggers that he would use to destroy the Golgothian Sylex with the help of Grenfell Mor and Altair of Coloni. What is worse, Ravidel took Liana's Moxen and erected the Mox Beacon that would start the Planeswalker War.[1]

With the aid of Altair of Coloni, Caliphear the Nightmare, and Kristina, Jared battled Ravidel at the Dueling Chasm of Golthonor. During the battle, he was able to draw on all five colors of mana, having been taught by Kristina and his other companions the other forms of magic. Ravidel set off the Mox Beacon and disappeared in the chaos of the crumbling monoliths of the chasm; Jared ascended and became a planeswalker in time to planeswalk away from the crumbling monoliths and save Kristina from falling or being crushed, though Altair was apparently killed.

It is not known if Jared survived the war; however, Kristina did not speak of him during the Phyrexian Invasion, so it may be assumed that if he is not dead, he is at least indisposed.