For other uses, see Johan (disambiguation).

Johan, Tyrant of Tirras and Emperor of the Northern Realms, was a powerful but evil mage who tried to conquer the Jamuraan western continent. While ruthless and cruel, he saw himself as benevolent toward his people, having managed to unite the barbarian tribes of the northern mountains with his Tirrans under the common goal of reclaiming more southern land for prosperity. He fashioned himself as being the only one capable and deserving of leading the Jamuraan people and saw his destiny as uniting all of Jamuraa under his rule.

A mage of the mountains, Johan was a master of Red mana in all its destructive forms, but he was also known for his illusions and his potent protective spells which left him almost invulnerable and allowed him to fight his battles next to his men on the front lines. Obsessed with occult and arcane knowledge, he possessed a vast collection of magical artifacts and countless spellbooks, all of which allowed him to perform feats unequalled by other mages. Arguably the most powerful mortal wizard of his time (at least on Jamuraa), his only rival might have been Hazezon Tamar, who bested him twice.

Johan had always planned to conquer all of Jamuraa with all the power he had accumulated. His first step was becoming Tyrant of Tirras, and proclaiming himself "Emperor of the Northern Realm". The land of Tirras was enclaved by mountains, and the only way for the tirrans to survive was to send raiding parties along the River Toloron. The only way for Johan's empire to prosper was to extend along that river. To that end, he warred with all the city-states south of Tirras, most notably Bryce. His first attempt saw him stalled at Palmyra by an army led by Hazezon Tamar and Jaeger Ojanen (father of Jedit): his own army ended up dispersing due to a magical sandstorm conjured by Hazezon. He confronted Jaeger during this battle and while a sand wurm killed his enemy, he ended up convinced the tiger man was responsible for his defeat.

Riding a fire drake east alone through the desert, Johan barely made it to the oasis of Efrava. There, disguised as a normal human, he met Jedit Ojanen whom he manipulated with a magical charm. While the tribe saw him as a menace (he was the first human to set foot in the oasis, and the Efravans though humans to be mere legends before meeting him) he used his mental control of Jedit to have him plead to be his guardian. The elders reluctantly agreed, and accompanied by Hestia, the trio explored the oasis from border to border. Johan was actually both forming mana bonds with the land and cartographing it in prevision of its future conquest. Once his treachery was discovered, Johan killed a couple of Efravan guards to escape to the desert, west this time, with Jedit in his pursuit.

Johan journeyed west to the Great Wall and beyond, to Shauku's fortress. The vampire lured him with promise of informations on the tiger man's origins, but it turned out to be a plot to enslave him in her service. While Johan escaped, he decided that his conquest of Jamuraa would start with the enslavement of the cat warrior tribes of the Sukurvian Desert: united under his banner he thought, they would make an unstoppable army; additionally their oasis was located in the desert making the jonction between the western and eastern continent, making it an ideal base of operation to launch his conquest of all of Jamuraa. 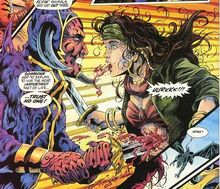 Johan returned to Tirras, were he amassed his forces once more, this time focusing the war effort on building skyships capable of traversing the Sukurvian desert without risking losing his army to the sand wurms. He managed to capture the Robaran Mercenaries who were spying on him, imprisoning Hazezon Tamar and Adira Strongheart in a room without door or window. Unbeknownst to him, Hazezon had learn to shift (to teleport) and was therefore able to escape. While the spies couldn't stop his plans, they managed to warned the city-states, who started to build their own fleet of flying skyships under supervision by Hazezon.

The final battle of what would be called Johan's War was fought in the oasis of Efrava in the Sukurvian desert, where both his human enemies and the tribes of cat warriors united against him. Aboard his own flagship, the Icewind, Johan used his magical superiority to turn the tide of battle in his favor, incapacitating Hazezon by turning his own spell against him. The surviving Robaran Mercenaries boarded his ship, and tried to confront him head on. Protected and strengthen by his magic, he killed Adira Strongheart by ripping her heart out of her chest with his bare hands. Out of desperation, Jedit Ojanen charged the tyrant, and fell overboard with him. The sixty feet drop into the desert nearly killed the tiger man, but Johan, while disoriented, was unharmed thanks to his protective spells. It is then, with victory within his grasp, that Johan died the same way Jaeger Ojanen had, eaten by a sand wurm.

With the news of the Emperor's death spreading, his generals turned on each other in hopes to seize power for themselves. Disorganized and overwhelmed, the invading fleet fled north-east to disappear in the mountain. So quick was their retreat that most ground troops were left behind in the jungles of Efrava: they would surrender over the following days in exchange of their supplies (who would feed the cat warriors for months). Hazezon Tamar would take pity on them and escort them back to their homeland of Tirras.

The death of Johan ushered an era of peace and prosperity on Jamuraa, having united the surviving people in a spirit of collaboration: the Robaran Mercenaries expanded and explored several islands in the name of their fallen leader Adira, ending up creating colonies of whom they became the governors. Hazezon Tamar served as governor of Bryce for another decade, then disappeared at the head of a fleet of skyships he had build. His own flagship, Adira's Kite, is said to have sailed and explored the ocean up to the far ends of the Domains, dispensing magic and gold to the innocent and punishing tyrants with an army of his trademark Sand Warriors. Finally, the tiger tribes multiplied, Jedit finding himself at the head of a true dynasty of children and grandchildren. Under his farseeing leadership, all the tiger tribes were reunited and moved back to the Scarwood where they rebuilt The Tabernacle at Pendrell Vale and founded a mighty empire that took its place among the peoples of Dominaria.