For the keyword ability, see Jump-start. 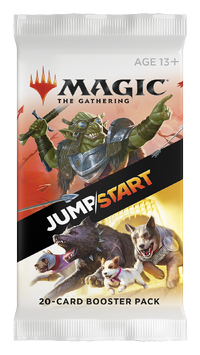 Jumpstart is a supplemental Magic booster set with mostly reprints and some new cards. The set is closely tied to Core Set 2021 but is a stand-alone product.[2] 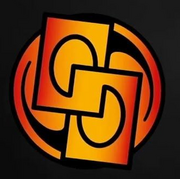 Jumpstart melds an easy way of deckbuilding with the “shuffle up and play” speed of constructed. In this, it is similar to the Smash Up game by Alderac Entertainment Group and KeyForge by Richard Garfield.

The set introduced a new way to play Magic that mashes together themes from throughout the history of the game and lets you skip the deckbuilding part. To play a game of Jumpstart, players simply open two boosters and shuffle them together to form a ready-to-play deck. The set contains almost 500 reprints but also introduced 37 new cards that were designed to help fill out some of the themes. These are not Standard-, Pioneer-, or Modern-legal cards, but they are legal in Eternal formats (Legacy, Vintage, Pauper and Commander). There are no foil cards in the set. 169 cards are from Core Set 2021[8] and feature the M21 expansion symbol, and over 400 are reprints from sets before Core Set 2021, which, along with the new cards, have the Jumpstart symbol. Reprints have a Post-M15 card frame. The new cards and cards with new art are numbered #1/78 to #78/78 (11 commons, 7 uncommons, 14 rares, 6 mythic rares, 40 basic lands). The other reprints with the Jumpstart expansion symbol are numbered #79-495 (186 commons, 147 uncommons, 73 rares, 11 mythic rares).

The set was designed for two-player gameplay, but players can also play multiplayer with it.[9]

Jumpstart was sold in 20-card boosters, and booster boxes contain 24 boosters.[10] All 20 cards in a booster fit a theme, and most themes are mono-color and have multiple variations of cards included in the pack, totaling 121 different possible pack contents. Special "Mythic Rare" packs don't have variations at all, but just one possible card list and can feature multiple colors. What theme each booster contains is randomized. Most packs are singletons, but there are some instances of having two copies of a card in the pack. All boosters contain at least one rare, and one in three boosters includes an extra rare. Of the 20 cards in a pack, seven or eight are lands. One basic land (or in the case of Rainbow, Terramorphic Expanse) features art that matches the pack's theme. The planeswalker themed packs use the respective Showcase lands from M21, but the other packs use brand-new themed land art created for the set. The booster pack is wrapped like a regular pack, but the set of cards is packed in an additional plastic wrap, with a face card (the "Pack Summary card") that indicates the theme and the color of the half-deck.

The set didn't have a limited print run and the availability of themes wouldn't change, though it was put on hold during the 2019-2020 coronavirus pandemic. The set is available in English only.

Jumpstart was released on MTG Arena on July 16th, 2020. Jumpstart cards on MTG Arena are legal in Historic. Some of the deck contents are slightly different from the paper release.[13] The official physical way to play is to open four packs, and then choose how to pair them and then play with two decks. That process works a little differently on MTG Arena. The card pool will be slightly different, too, since some cards don’t work so well on computers because of the way they ask the player to constantly confirm decisions, because of concerns for the Historic format, or due to technical constraints. In total, twenty cards printed in Jumpstart boosters were excluded from the MTG Arena.[14]

There are 46 themes that range from the familiar to the curious. Common themes are each represented four times in different variations among the 121 packs, rare themes twice, and mythic themes are represented only once. The rarity of a given pack should not be taken as an indication of power level; but rather how replayable the theme is.[15] The variant decklists of a given theme always have the same general flavor, mana curve, and game plan.[16] In addition to the Rainbow deck, each color features two mythic themes, three rare themes, and four common themes.

Jumpstart comes with neither tokens nor emblems: that said, a number of cards in the set generate tokens, so a list is provided below for reference. (A list of tokens and emblems for cards printed in Core 2021 can be found here.)

^† These tokens do not have paper printings as of the time of release.

The following tokens are produced by cards exclusive to the digital release of Jumpstart on Arena.

Twenty cards are excluded from the MTG Arena release as a result of either their perceived power level being too high for Historic or their implementation requiring more time than was available.[14] These 20 paper exclusive cards were replaced with 20 alternative cards when Jumpstart was released on Arena, several of which were new to Arena.[18][19]

There were several quality issues reported for Jumpstart packs. The most notable was the appearance of cards with two different card faces layered over each other. These "fused" cards resulted in combining basic lands into accidental dual lands that garnered high prices on the secondary market.[20][21]

Shifted from the last non-precon set (mentioned in parentheses).

These cards are all new to Pauper.