Kaervek the Merciless was a black-aligned human warlock from Dominaria. He was the main antagonist of the Mirage block storyline.[1]

Kaervek came from one of the states of Urborg. Ambitious and talented in magic at an early age, Kaervek harbored dreams of ruling a kingdom. But in a realm as harsh as the Burning Isles, there were dozens of lords capable of thwarting his goals of rulership. 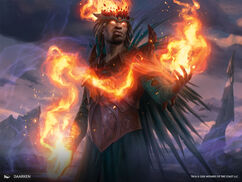 When he picked up an enormous energy surge from the Chaza Isles, he set sail to discover what caused this and, more importantly, if he could use it to his advantage. However, this energy surge had been caused by the planeswalker Teferi, when he accidentally removed himself and everything else on his island from the time stream. Thus when Kaervek arrived, he did not find anything of use, just a barren rock in the sea. He did meet with two other people who had been attracted by the energy surge though: Mangara of the White Woods and Jolrael of Mwonvuli.

The three settled in Jamuraa and Kaervek quickly allied himself with Jolrael. When they returned from a survey of the continent to find Mangara in control of the kingdom of Zhalfir, Kaervek convinced Jolrael that Mangara had but one purpose: to take over the continent. Together they planned their assault, and a war began. Kaervek managed to trap Mangara in an Amber Prison, but he manipulated Jolrael to continue the war so he could seize Jamuraa for himself.

Calling upon his allies from Urborg, the nightstalkers and the Breathstealers, and his right hand, the panther warrior Purraj, as well as the Viashino Jolrael had allied herself with, and the dragons the lizard-men commanded, Kaervek raged a long war at Zhalfir, Femeref and Suq'Ata. But at a certain point in time Rashida Scalebane and Asmira managed to free Mangara. Mangara then defeated Kaervek and locked him inside the amber prison himself.

According to Hakim Loreweaver, the amber prison was swallowed by a goat named Nine of Thirteen shepherded by a goatherd named Jojo. After a battle with Bwire, a shaman rumored to be a relative of Kaervek, the guildmage Fola released Kaervek from the prison to imprison a dragon in his place. Loreweaver admits that this story may not be entirely true.[2]

It is possible that the amber prison, located in the prison-city of Aku was removed from the timeline by Teferi along with the rest of Zhalfir. If this is so, Dominaria may have rid itself of Kaervek after Zhalfir was lost in the time streams due to the interference of the planeswalker Jeska.