Kaladesh is a plane where aether manifests more than on other planes, being present in the atmosphere. Kaladesh was introduced in Origins as the home plane of Chandra Nalaar.[2] Slightly over a year later, it was the setting for a block of the same name.

The atmosphere of Kaladesh is saturated with Aether due to a greater proximity to the boundaries of the Blind Eternities. The influence and cyclical passage of Aether through the world below is the driving force of the plane. The aethersphere may be observed as twisting swirls in the sky. From time to time, this Aether comes down to the earth via rain or similar weather events. The entire ecosystem is influenced by it and grows with it in similar swirling and twisting patterns. Refined aether is the primary power source for most of Kaladesh. In Ghirapur, the raw aether is harvested from the sky via large aetherspires placed on mountaintops or thopters, refined, and then pumped through large pipelines all over the city.

Kaladesh is an ethnically diverse [3] plane where natural mages are rare. Work that would be done with magic on other planes is instead accomplished through devices.[4] The automatons, thopters and other artifact creatures of the plane are all fueled by the aether. These artifacts are built as much for beauty as for function. Inventors are the most valued members of society.

Natural mages are a rarity on Kaladesh and are regarded with suspicion and dread. Fire magic is strictly banned, and pyromancy punishable with a death sentence, since pyromantic magic interacts dangerously with the aether in the air.[5][6] Religion plays next to no role in the lives of the plane's people, and magic derived from the power of the gods is unknown.

Kaladesh is ruled by the Consulate. Its forces and works are nearly omnipresent.

Since the discovery of harnessing aether by Avaati Vya sixty years ago, the Consulate reportedly has worked to ensure that this refined aether is accessible to all, leading to an era referred to as the Great Aether Boom. This happened around the same time as the Mending.[7]

The current era is known as the Inventor's Renaissance, with the Consuls promoting and patronizing new discoveries and scientific studies, awarding the most impressive during the Inventor's Fair. The Consulate also heavily trafficks use of the aether, assigning its use among the citizens. They are opposed by Renegades, who believe that the Consulate is corrupt and constricts their freedoms. 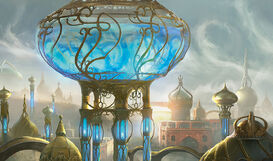 Most lifeforms of Kaladesh have been transformed by the aether in some way.