This set is a top-down Norse mythology-inspired set; Magic's take on what a world inspired by Vikings might look like.[8][9] This set contains 285 regular cards (121 commons, 80 uncommons, 64 rares, 20 mythic rares, 10 basic lands) and includes randomly inserted premium versions of all cards.[10] The number of regular cards include snow basic lands (#276-285). Each type has two different pieces of art. Alternate card frames have another card number than the original version. Borderless planeswalkers are numbered #286-289, borderless pathways are #290-293, borderless Foretell mythics are #294-298, Viking showcase cards are numbered #299-332, the showcase Vorinclex with Phyrexian text is #333 and extended artwork cards are numbered #334-373. Unique cards in Set- and Theme Boosters are numbered #374–393 (15 uncommons, 5 rares).[11] The basic land cards from the Bundle are numbered #394-398. The Buy-a-Box card is #399 and the Bundle promo is #400. The FNM-treatment cards from the Universal promo pack are numbered #401-405. 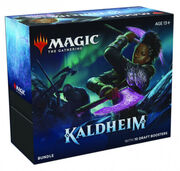 The planeswalker Kaya visits a world of prophecy and legend, mortals and monsters.[13] A world of many realms, epic sagas, bound by one truth. Viking or Valkyrie, Elf or Dwarf, all belong to the World Tree, all are supplicant to the gods. Gods who travel between the realms to do their bidding for peace, for bloodshed, or for their own amusement. But what if there was a way to harness this power? A weapon with the ability to protect all. A weapon of pure strength. Forged for a god. Or... in more creative hands, a weapon of unimaginable chaos.

The World Tree is the origin of all life on Kaldheim, and you can see the branches in the sky in all ten realms. However, they look different in each realm. The Ten Realms are constantly shifting and moving around the World Tree and can even collide. Such an epic event is called a "doomskar" and causes earthquakes, destabilization, and total chaos.[14] 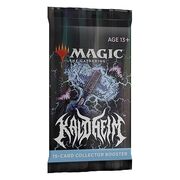 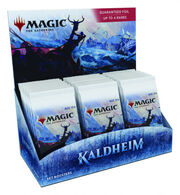 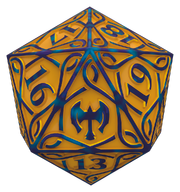 With the release of Kaldheim, 48 cards were rotated into The List, many of which were thematically or mechanically linked to the set.[17]

The sixteenth card in the boosters is a token creature card, an emblem or a marker, with advertisements on the back side. It can also be a helper card with a standard card back. There are a total of 23 tokens and emblems:[19] 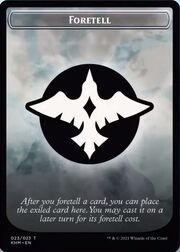 Kaldheim has a tribal theme. Each Realm is associated with two colors of magic and one creature type,[14] with a particular strategy associated:

In lieu of the abandoned block model, R&D has found a new way to tie together the three non-core premier sets in a single Magic "year" (aka the fall, winter, and spring sets—using northern hemisphere seasons): they share a common mechanic. For Zendikar Rising, Kaldheim and Strixhaven: School of Mages that is modal double-faced cards.[20][21][22] Modal double-faced cards have two faces, one on each side. When you play a modal double-faced card, you choose the face you're playing. The MDF's of Kaldheim all feature a God on one side.

An unnamed mechanic, dubbed "Cremate", uses creature cards in the graveyard as a resource. Another theme is that several cards have triggered abilities that trigger whenever you cast your second spell in a turn.[10]

Kaldheim sees the second return of the Saga enchantment subtype, after appearances in Dominaria and Theros Beyond Death. They are multicolored for the first time.[24][14]

The supertype Snow also returns, and this time on non-permanents.[24] Snow doesn't really do anything by itself, but it can be referred to by other cards in various ways. Snow cards now have their own recognizable snow frame. Each Draft Booster will include a Snow basic land slot and has a chance to be foil. There is a chance for one of the dual snow lands to take the Snow land slot.

The set introduces the Rune and Shard[24] enchantment types.

Additionally, the set introduces the Niko and Tyvar planeswalker types, and the Phyrexian creature type on a surprise appearance of Vorinclex.[24]

Coward finally appears as a creature type on the card, Craven Hulk.

Viking was considered as a creature type, but R&D decided against it.[25][26] Instead, Viking-esque creatures have the creature type Warrior or Berserker. Supporting party from the previous set, classes represented are either Berserker or one of the party, and appear more on usually classless races like Angels, Demons, Zombies and Trolls.