Kangee, was an aven wizard from Dominaria and a prominent member of The Order.

During the time of the Phyrexian Invasion of Dominaria, Kangee was an influential leader of the Northern Order in Otaria, with many soldiers obeying his commands and many apprentice wizards studying under his tutelage. Kangee's aerie was based in the Skollten Mountains, where he kept many hawks which he used as his eyes to see what was happening within hundreds of miles. While the Phyrexian Invasion didn't hit Otaria hard (the Phyrexians didn't consider the continent to be strategically important), Kangee and his followers felt duty-bound to fight against such a great threat to all of Dominaria. Kangee led troops and hawks into combat in several major battles, downing Phyrexian troop carriers before they could disgorge their monstrous warriors.[1] 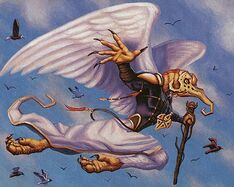