Karfell is one of the ten realms of the plane of Kaldheim.

Frigid seas lash against glacier-covered shores in the harsh realm of Karfell. Long ago, this realm was ruled by dynasties of High Kings and Queens in a contorted web of alliances, vassal states, and mighty fortresses, but only the shadows of those glory days remain. Now, the fortresses are crumbling and half-buried in snow, and almost all the realm's current inhabitants are undead. These zombies, known as draugr, retain the intelligence and memories they had in life, and they give their allegiance to Narfi, the Last High King of Karfell. Karfell was once a land ruled by wealthy nobles who dwelled in formidable fortresses, all of which have fallen into a state of snow-crusted ruin. Despite its misfortunes, Karfell's great wealth is legendary throughout the realms. Many raiders brave the harsh conditions in hopes of finding the old rulers' extravagant treasures, rumored to be hidden under the ice or inside ancient glaciers. The lich-king Narfi still rules from the Port of Marn, the greatest of the old cities, and holds court with his undead nobles while a frigid wind blows through cracks in the stones. The massive, fortified port is protected from the lashing tides by a towering seawall, known as the Haunted Edge for the thousands of skeletons entombed inside it.[1] 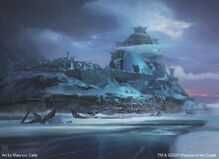 King Narfi maintains an army of raiders known as the Dead Marn. Whenever a Doomskar or Omenpath presents the opportunity, the Dead Marn pillage other realms in search of more treasure to add to Karfell's already packed treasure vaults. The treasure vaults of ancient Brinebarrow are said to be so fabulous, they have become a byword for great wealth throughout the realms. Yet, curiously, no raider has ever returned with more than a few coins from this hoard. Most who seek Brinebarrow don't return at all. The rest come home with tales of incredible treasure hoards, but they might describe the jeweled goblets they stole and then display nothing more than tarnished old cups.[1]