Kasmina is a Planeswalker introduced in War of the Spark.[1] She uses transformation and control spells.

Kasmina has long honey-blonde hair, a blue-white hooded cloak, and a long crook-staff.[2] She can use her transformation magic to polymorph organic beings. This ability can be used offensively, e.g. transforming an enemy into a helpless creature like a frog.[3] She can also take direct mental control of other people's actions, effectively possessing them.[2] In addition, she can see through the eyes of her owl familiars. Finally she can control air, being capable of creating blades out of pressurized air.

She is centered in blue mana. As Kasmina planeswalks, a cloud of white feathers, much like the feathers of her owl familiars, whip over her.[4]

Kasmina is the leader of an ancient, secret order of Planeswalkers, a shadowy cabal with mysterious aims. Her larger goals are unknown, but her recent obsession is recruitment. Her preferred method is to identify what she calls "embers", non-ignited Planeswalkers. She helps these mages to discover their potential, even if it means causing trauma to ignite their spark, and then indoctrinates them in the ways of her order. She is preparing for a looming conflict that dwarfs the War of the Spark.[5] 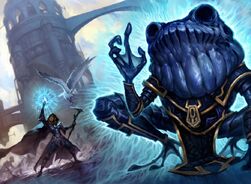 Kasmina was lured to Ravnica by the Interplanar Beacon, and immediately became trapped there due to Bolas's use of the Immortal Sun. Alongside many other Planeswalkers and Ravnicans, she fought against the Eternals of Bolas' Dreadhorde.[6] The skillful use of control magic allowed Kasmina to temporarily pull an Eternal to her side during the fight.[2]

Kasmina went to Kylem and invites Rowan and Will Kenrith to study at Strixhaven. When the twins arrived at Arcavios, Kasmina guided them to the campus. Will asked Kasmina if she was a native of Arcavios. Kasmina replied that she had studied for many years on the plane, but was not native to it. Kasmina used one of her owls to watch the twins and discover their potential, while another of her owls watched over Lukka's actions elsewhere on Arcavios.[7]

She later confronted Lukka, who figured out she was spying on him. They battled, Kasmina winning but being forced to retreat once swarms of mage hunters arrived.[4]