A Keyword counter is a counter that give a permanent they're on a keyword ability. The game mechanic was featured in Ikoria: Lair of Behemoths.[1][2]

A permanent with a keyword counter on it gains that keyword. To determine how this interacts with continuous effects, use the counter's timestamp. The timestamp of a counter is the most recent time that any counter of that kind was put onto that permanent.

During its introduction in Ikoria: Lair of Behemoths, there were several spells that rewarded creatures with particular keywords (keyword "lords"), as well as multiple creatures and spells that granted the choice of several keywords.

Keyword counters were introduced on a test card in the Mystery Booster set (Recycla-bird with flying counters).[5]

Ikoria: Lair of Behemoths and Commander 2020 widely expanded on this with ten more keyword counters.[3] Double strike and indestructible counters only appear on cards in the Ikoria Commander set, and not in the main set. 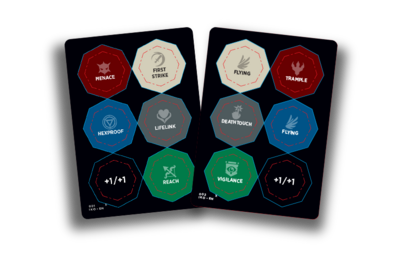 Keyword Counter
A marker placed on an object that modifies its characteristics by granting it a keyword. See rule 122, “Counters.”