Kithkin are a quick and agile race of small humanoids, mostly associated with white mana.[1] The first card to bear the creature type was Amrou Kithkin in Legends.[2]

Kithkin are humanoid or elf-like creatures[3][4] that are predominantly associated with white mana;[5] however, kithkin have been shown to be associated with green, blue and red mana, albeit always secondarily.[5]

Kithkin value "community, simplicity, and forthrightness"[3] and are "quick, agile, and highly cooperative in battle".[3] Although no more than 4'5" tall, they are taller than dwarves, hobbits, and halflings.[3] Furthermore, culturally, they are different from hobbits, as kithkin do not "have an unusual fondness for 'pipe-weed' or ale, they don't go barefoot or burst into song more than other races, and they don't take particular pride in their beards or gardens".[3]

Generally, kithkin are fair-skinned and have notably exaggerated noses and ears, and otherwise unremarkable physical features. 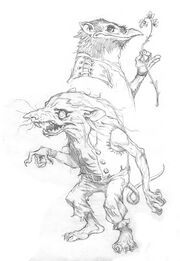 Initially, in the concepting stage of Lorwyn, kithkin were depicted in artwork as more monstrous, more closely resembling humanoid rats; however, they became closer in appearance to the humans that they were replacing in the block.[6]

Originally, kithkin were to be called hobbits, which is reflected via the common phenotypic characteristic of their short stature and hairy feet; however, so as to avoid conflict with the estate of The Lord of the Rings and The Hobbit author J. R. R. Tolkien, the name of these creatures were changed from hobbits to kithkin. This origin story of the kithkin creature type name has been confirmed by the illustrator of the inaugural kithkin, Amrou Kithkin, Quinton Hoover.[7]

Fittingly, as community-oriented creatures, the creature type name may be formed from or influenced by the archaic English term "kith and kin", which is a term for friends and family.[4]

Market research showed players disliked Kithkin. They were often called “creepy”.[8] As such, Eventide was the last seen printing of new Kithkin, and the return set Dominaria had no mention of them. However, Commander Legends would then print a new card featuring this creature type by the name of Kinsbaile Courier.

The kithkin of Dominaria once lived in an idyllic country called Amrou Haven[9] , but after the Apocalypse, their home was destroyed. The kithkin remained in their ancestral home, seeking out a meager existence as nomads on the dusty salt plains of the ruined paradise. After the restoration of Dominaria, the kithkin set about the long task of restoring their homeland.

Dominarian kithkin resemble short humans more than anything else. They are about four-and-a-half feet tall; their distinguishing characteristics are their brown hair, large noses, and feet covered in light hair. Kithkin place great emphasis on community and are highly cooperative in battle, and are known for their simplicity and forthrightness. The kithkin of Dominaria do not have access to thoughtweft like their Lorwyn cousins. 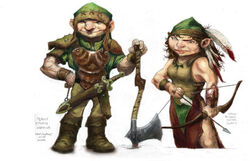 The kithkin of Lorwyn are peaceful farmers, but are fierce warriors when provoked. Their society is based on a type of collective consciousness called the thoughtweft. The thoughtweft connects the kithkin by a kind of empathic web, allowing them to share their emotions and thoughts, making them very effective in battle cooperation. They are quite superstitious, and their magic is often powder-based. Everything that is of cultural importance, like stories and customs, are found in the Book of Kith and Kin.[10] Kithkin knights and soldiers ride into battle on springjacks, which they also raise for their wool and meat.[11]

Lorwyn kithkin society is centered around interrelated villages and towns called clachans. The head of a clachan is called a cenn, or mayor. Known clachans include Kinsbaile, Burrenton, Goldmeadow, and Cloverdell. Gaddock Teeg is the cenn of Kinsbaile, whereas Deagan is the cenn of Burrenton, a clachan of smiths.

Physically, Lorwyn kithkin are shorter than their Dominarian counterparts, with stout bodies and thick limbs. Their faces are round and almost pumpkin-like, with highly expressive features. Lots of convex and rounded shapes in armor and weapon design reinforced their visual sensibilities.[12]

Beyond the thoughtweft and their community spirit, these kithkin have other quirks; they are innovative builders and alchemists, using both craftsmanship and magic to construct melee weapons, armor of leather and bronze, bows, slings, traps, farming equipment, furniture, potions, powder-bombs, healing circles, barrier rings, flight auras, and balloon-driven air vehicles.[13][14] 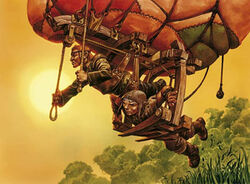 Kithkin are reverent and superstitious. They venerate the mysterious greater elementals of Lorwyn, beings that embody the abstract concepts and dreams (and sometimes, nightmares) of the plane. They feel that the movements and actions of the greater elementals represent omens for their own lives, and watch them with respectful distance.

This augury mingles with the kithkin propensity for superstition; they propagate hundreds of odd little folk practices to protect their good fortune. For example, a kithkin might wear a bit of silver on her knife hand when eating jackmutton, to prevent the rest of the herd from becoming nervous or irritable. Most of these superstitious practices fall somewhere between wise folk medicine and utter hogwash in terms of actual usefulness, but kithkin follow them faithfully.

Kithkin celebrate Lammastide, a holiday involving dancing and the tying of ceremonial ribbons. Dancing is an elaborate affair among kithkin, serving to heighten and solidify the bonds of thoughtweft. They also celebrate the Aurora, an annual show of flickering lights that plays across Lorwyn's sky, usually with a gathering of multiple clachans and droning cenn speeches.

After the Great Aurora changed the idyllic plane of Lorwyn into the fearful world of Shadowmoor, the kithkin became furtive creatures with oversized white eyes or gold with no pupils.[15] The mindweft (the name that the thoughtweft receives in Shadowmoor) that once bound them together in comforting harmony now linked them all in a state of constant paranoia; they are obsessed with conformity and fear anyone not like themselves. Their rustic clachans became armed fortresses called douns where the kithkin huddled together like rats in a corner, barely keeping the horrors of Shadowmoor at bay.

Some douns seem to be more paranoid than others (fearing even leaving their own houses alone), while others have lone scouts that watch the area.

Like their Lorwyn culture, they can also have a designated Hero who is empowered by the mindweft.

The kithkin of Shadowmoor were the creators of huge inanimate scarecrows, though they became animated for unknown reasons and they lost control of these malignant constructs.

Lorwyn block featured two tribal Kithkin cards, which could be fetched by Kithkin Harbinger or can be made cheaper to cast with Ballyrush Banneret: