Kristina of the Woods

Kristina of the Woods was a planeswalker native to Corondor on Dominaria, whose planeswalker's spark manifested after the creation of the Shard of the Twelve Worlds.

Shortly before the Ice Age she met and fell in love with Taysir. They journeyed the Shard helping various peoples, until the Summit of the Null Moon. There, they defeated Leshrac and resurrected Ravidel. 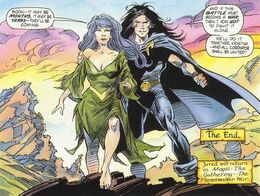 After attending the World Spell, Taysir gave her a Reflecting Mirror as a proposal gift, but she refused. Kristina left Taysir to explore the multiverse, rather than use her power to get him back into Rabiah as he wanted. During her travels, she again fell in love, this time with the minotaur planeswalker Sandruu. An enraged Taysir found out, and banished Sandruu to a plane from which it would take a millennium to return, thereby ensuring that he and Kristina would not reconcile.

Kristina attended the gathering of Minorad shortly after the World Spell, which turned out to be a disaster when Ravidel appeared and threatened them with the Golgothian Sylex. Kristina stayed in Dominaria and saved Jared Carthalion from punishment in Hamath by Visionary Kadesha in the year 1281 by the Reckoning of the Sages of Minorad. She taught him how to use his magic, and later became his lover. When she saw Ravidel battle Liana at Minorad, she helped Jared find the two long-daggers that would destroy the Golgothian Sylex. She was wounded in battle against Ravidel at the Dueling Chasm of Golthonor, but was saved by Jared when he ascended and became a planeswalker. Together they fought in the Planeswalker War. Whilst it is known she survived it, it is unknown what happened to Jared (due to the comic detailing the events of the war never getting made). However, he is not mentioned the next time she appears, implying he died.

During the Phyrexian Invasion, Kristina became one of the Nine Titans as replacement for the insane planeswalker Parcher. Her relationship with Taysir and his ward Daria made it clear that the two were again on friendly, but in no way romantic, terms. She was "accidentally" killed on Phyrexia by Tevesh Szat before he betrayed the Nine Titans in earnest.