Legendary is a card supertype. Any permanent (artifact, creature, enchantment, planeswalker, and land) with the legendary supertype is bound by the "legend rule," which prevents multiple copies of the card with the same name from existing on the battlefield under the same player's control. Legendary may also appear as a supertype on non-permanent cards (instants and sorceries). The rules for these are different: you can't cast a legendary nonpermanent spell unless you control a legendary creature or a legendary planeswalker. Legendary cards are historic.

Flavor-wise, legendary cards represent the key people, places, and objects of a set's story. Typical expansion sets contain no more than ten to fifteen legendary cards, with the exceptions of Commander Legends, War of the Spark, Dominaria, Kamigawa block, and the early expansion Legends, each of which had a legendary theme and contained significantly more. Except for cards found in those sets, or in compilation sets, such as the ones within the Masters series, all legendary cards carry a rarity of rare or mythic rare.[1][2] The legendary knights from Throne of Eldraine are another exception.

Legendary was first featured on several creature and land cards in the set Legends. Starting with Champions of Kamigawa it replaced the creature type Legend.[3]

Historically, before the release of Legends, the idea of the legendary supertype and its restrictions did not exist, nor did those restrictions have any functional equivalent printed on cards at the time. This, compounded with R&D's policy on avoiding intentional functional errata as much as possible, has caused cards that likely should have been printed as legendary (had the supertype and its associated rules existed since the beginning), such as Ali from Cairo, to stay nonlegendary. Although, the introduction of the supertype did not outright end the trend of flavorful legendary subjects being printed as nonlegendary on new cards, as seen with the rare utility tapland cycle from Zendikar, among others. Cards such as those are specifically designed with functionality over flavor in mind. 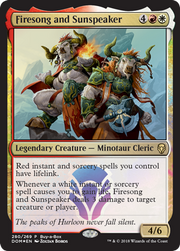 Legendary card frame, as of Dominaria

Starting with Duel Decks: Elves vs. Inventors and Dominaria, all legendary cards, except planeswalkers, have crown-like flourishes on the title bar of the card frame.[4]

If a player controls two or more legendary permanents of the same name when state-based effects are checked, that player chooses one of those permanents and immediately puts the others into their owners' graveyards, without any player having an opportunity to respond. This does not destroy the other permanents, does not cause them to be sacrificed, and cannot be prevented by being indestructible or having regeneration.

Currently, only five cards circumvent the "legend rule". Brothers Yamazaki ignores the rule for itself as long as exactly two copies of the card are on the battlefield, and Mirror Gallery and Sakashima of a Thousand Faces cancel the rule entirely. Helm of the Host creates a token that's a copy of the equipped creature, except the token isn't legendary if the equipped creature is legendary. Jace, Cunning Castaway and Jace, Mirror Mage create tokens that are copies of themselves, except that the tokens are not legendary. Spark Double creates a copy that similarly isn't legendary. Also, Sakashima the Impostor, Lazav, Dimir Mastermind and Lazav, the Multifarious can copy another legendary creature but keep their names, thus a player can have two legendary creatures with almost the same abilities.

Legend Rule
A state-based action that causes a player who controls two or more legendary permanents with the same name to put all but one into their owners’ graveyards. See rule 704.5j.

Other versions of the legend rule[edit | edit source]

From Legends to Champions of Kamigawa[edit | edit source]

Any person could play a Legend provided that that Legend wasn't already on the battlefield. If it was, that card was stuck in its owner's hand. They could cast it if they wanted to, but the newest one would immediately be put into the graveyard, so there was no incentive to do so.

This issue came to great prominence during the Masques block because Rebel decks centered around Lin Sivvi, Defiant Hero were dominant at the time. The card was so key to the deck that when two Rebel decks played one another, the first person to get Lin Sivvi out had an unfair advantage.[10] Tom LaPille laid out the various disagreements about the rules change in his article.[11]

From Champions of Kamigawa to Magic 2014[edit | edit source]

The second version of the rule checked to see if any other legendary permanent of the same name exists on the entire battlefield (regardless of the permanents' controllers) and sent all of those permanents (including the one which initiated the situation) to their owners' graveyards.[12][13] In effect, each legendary permanent served two purposes: its original purpose and the removal of all instances of that permanent already on the battlefield.

Planeswalker Uniqueness Rule (Obsolete)
Older versions of the rules stated that a player who controlled two or more planeswalkers with the same planeswalker type would put all but one of those planeswalkers into their owners’ graveyards. This rule was called the “planeswalker uniqueness rule” and no longer exists.

Although different, planeswalker cards used to have a similar rule: If a player controls two or more planeswalkers that share a planeswalker type, that player chooses one of them, and the rest are put into their owners’ graveyards. This was called the “planeswalker uniqueness rule.”[14]

Before the above update, the original rule acted as the legend rule did from Champions to Magic 2014 until this was changed at the same time the legend rule was; it looks at the battlefield and didn't care which player's control they were under. The most recent copy remained while all others were sent to the graveyard. This allowed, for example, someone to play Jace Beleren as a removal spell for Jace the Mind Sculptor as they shared the same subtype "Jace". [15][16]

Starting with Ixalan, this rule was abandoned.[17] All planeswalkers past, present, and future gained the supertype legendary and became subject to the "legend rule". Thus, if a player controls more than one legendary planeswalker with the same name, that player chooses one and puts the other into their owner's graveyard. This means for example that if you control Jace, Unraveler of Secrets and cast Jace, Cunning Castaway, both Jaces now can exist under your control.

Mark Rosewater has stated multiple times that he considers legendary to be a mechanical downside which he would rather get rid of.[21] If he was starting over he would make legendary a supertype with no rules baggage. He would create a keyword, called something like "unique", for things that needed for gameplay reasons to be restricted to having only one in play.[22][23] The rest of R&D doesn't concur with Rosewater's idea, or feels it is too late for the change.[24]

Dominaria debuted legendary sorcery cards that capture extraordinary moments from characters' pasts. These powerful spells can be unleashed only with the assistance of a legendary creature or planeswalker on your side of the battlefield.[25]

Although covered by the rules, legendary instants haven't been featured yet.

The first legendary enchantments were the Honden cycle from Champions of Kamigawa. The non-legal Heroes of the Realm card The Legend of Arena is a Legendary Enchantment - Saga.

"Legendary matters" effects may appear in all colors.[27] Examples:

Megalegendary was introduced on a test card in the Mystery Booster set (Your deck can have only one copy of this card.) If you're fortunate enough to have two copies of a megalegendary card in a Limited event, you can still put only one into your deck. The other remains in your sideboard.[28]