Lucky charms are life-gaining artifacts,[1] such as the ones originally from Alpha. 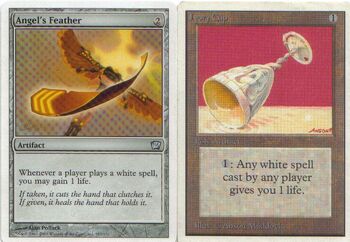 Angel's Feather from Ninth Edition and Ivory Cup from Unlimited.

The original lucky charms - Ivory Cup, Crystal Rod, Throne of Bone, Iron Star, and Wooden Sphere - are uncommon artifacts with a triggered ability that allows the controller to pay

to gain 1 life when a spell of a given color is cast. They were printed in every Core Set from Alpha to Eighth Edition. A similar artifact from the same set was Soul Net, which triggers whenever a creature dies.

A life-gaining artifact following the theme of the original lucky charms, Urza's Chalice, was printed in Antiquities. This artifact triggers on artifacts, rather than colors. It is so far the only lucky charm that's common rather than uncommon. Also, an artifact that imitated Soul Net's death trigger, Tablet of Epityr, was printed.

Another cycle of life-gaining artifacts was made in Darksteel. Angel's Feather, Kraken's Eye, Demon's Horn, Dragon's Claw, and Wurm's Tooth were printed in Darksteel, and they have been reprinted in every core set from Ninth Edition to Magic 2012.

These updated versions don't require the owner to pay mana in order to gain a life, at the cost of having the artifact cost

more. It was felt this would work better in a core set, which is targeted at newer players. At the time, core sets didn't have any new cards, only reprints, so room had to be found in an Expert-level expansion. Darksteel was finally the set to have this cycle see print because of the artifact heavy theme of the Mirrodin block.[2]

Time Spiral featured a lucky charm, Paradise Plume that could trigger on one color which was chosen as it enters the battlefield. In addition, it serves as a mana stone for the chosen color.

Following the theme set in Darksteel, Scars of Mirrodin improved on the original artifact lucky charm that was printed in Antiquities. Golem's Heart used the same change as the Darksteel lucky charms did: taking out the activation cost, but making it cost

For Magic 2014, a cycle of uncommon artifacts costing

more than the Darksteel cycle and

Each staff allows a player to gain a life both when casting a spell of the color, or when playing a land with the basic land type associated with that color. The staves only trigger when the controller plays a spell of the appropriate color instead of any player.

Following the Paradise Plume design, Tablet of the Guilds in Return to Ravnica costs the same as the Darksteel charms, but has the ability to choose two colors and gain off either (two life if appropriately multicolored).

Much like Paradise Plume and Tablet of the Guilds, the next charm from Magic Origins was Prism Ring. Reflecting the acknowledgment of the low power level of the charms in general, the cost was dropped back to one mana and allowed the choice of any color.

During Dominaria vision design, Richard Garfield designed a lot of updates to early Magic cards. One of his designs that seemed very promising was a cycle of artifact creatures based on the original "lucky charm" cycle.[3][4] Space issues first led to the cycle being transferred to Core Set 2019, and consequently being condensed into a single card by Ethan Fleischer. This is Diamond Mare.