Lukka is a red-aligned human Planeswalker from the plane of Ikoria.[1]

Lukka is a military-trained man in his late thirties. He is lean and muscled and has a short beard. His black, short-cropped hair is greying at the temples. He has the ability to bond and control animals. He can also shapeshift his features to take on animalistic features.[2]

Lukka used to be a member of the Coppercoats, an elite military squad tasked with protecting the human cities of Ikoria against monsters. He used to be engaged to Jirina Kudro, the daughter of the general of the Coppercoats. The influence of an unnamed planeswalker via the Ozolith has disturbed his sense of justice and destabilized his mental health. He has a strong urge to return home and take control of the city where he grew up, thinking his way is the only way. He always wants to be respected, but usually is feared instead.

Although he still has the ability to connect with animals, he sees them as tools rather than as allies.

Lukka was the Commander of the First Special Intercept Squad, commonly known as the "Specials", which acted as a small incident reaction team.[3] He had spent half his life - twenty years - in the Coppercoats, and the last two years as captain of the Specials. 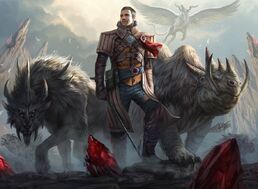 Lukka gathers an army of monsters to attack Drannith

After he bonded with the winged cat, Lukka was banned from Drannith and became an outcast. The visiting planeswalker Vivien Reid had sensed some of his bonding magic and came to investigate. She rescued Lukka from his pursuers and befriended him. They found out that a crystalline formation in the north, the Ozolith, had been instrumental in causing the bondings and the newfound rage of the monsters against Drannith. The Ozolith had been used for this purpose by an unnamed planeswalker known for his meddling. Since Lukka had been successful in counteracting the rage in his winged tiger, he and Vivien theorized that he would be able to neutralize the workings of the Ozolith, as well.

Under the influence of the Ozolith he became powerful but imbalanced. He formed an army of beasts, that he proposed to use to defend the city. As Kudro refused to listen, Lukka killed him. Against his deluded expectations, Jirina refused to join him. She attacked him and fled home to take command of Drannith's defenses.

Believing that his newfound power would save Drannith in the end, Lukka and his army attacked the city. The sheer number of monsters threatened to overrun Drannith, but Jirina's strategy of defense and use of the bonders proved enough to turn the tide of battle. Facing defeat, Lukka attempted to use more of the Ozolith's power but was warned by the unknown planeswalker of its consequences. Lukka refused to listen and the Ozolith exploded, causing his planeswalker's spark to ignite as he planeswalked away.

Lukka awoke in a swamp on another world facing a small group of dangerous beasts. Although the power of the Ozolith was gone, Lukka was still able to control one of them. Glad to be alive and with at least some of his power intact, Lukka vowed to one day return home.

Still coming to terms with his newfound power, Lukka traveled to Arcavios. Faced with the hostility of the inhabitants, he was drawn to the crazy, mysterious presence of the dark mages called the Oriq.[4][5] After he had arrived on the plane, he bonded with a grey fox-like, fire-breathing creature, called Mila.[5] During a confrontation between the Oriq and a Dragonsguard, Lukka was mistaken as one of the Oriq but was saved by Mila. While searching for the dark mages, Lukka was captured and taken to their leader Extus Narr, who Lukka discovered had knowledge of planeswalkers. Extus explained that there were things he could teach Lukka and proposed a trade.

Lukka had developed a deep distrust of Strixhaven and its influence on the plane, due in part to his rejection by local inhabitants and for the ongoing persecution of the Oriq. Now with a common enemy, Lukka decided to help the Oriq by distracting Kasmina and coordinating a mage hunter attack on Strixhaven.[2] However, when the tide was turned by the Founder Dragons, Lukka quickly left the battlefield.[6] He was last seen wandering the land with Mila and a few of the remaining Oriq, scrounging for food and shelter. It is currently unknown what Lukka received from Extus Narr in exchange for his help.

Lukka is a Bonder from the plane of Ikoria, and as such he can form a magical bond called Eludha with creatures across the multiverse. Here are the various creatures he has bonded with across the planes.

Lukka first experience bonding was with a large winged cat known as a patagia tiger. The cat was huge, easily taller than a man, and longer than a cart. Its basic form was cat-like, with thick white fur cut by light brown stripes. Its fangs included two long canines that protruded beyond its lower lip like a pair of swords. It had leathery wings. The monster was very smart and tried to protect Lukka's humanity, but was executed in a Heartless Act by General Kudro. Lukka never even gave her a name.[3]

Mila is a magical, grey fox-like creature with many spots that can breathe fire. Lukka first meets her when she brings him food after he nearly starves. He then bonds with her. Sometime later, he gets into a fight with a Dragonsguard and Oriq members. Mila then rescues him. He then stengthens the bond with her.[5][7]