Edit this Page
watch 02:58
No Man's Sky Update - The Loop
Do you like this video?
Play Sound
Magic: The Gathering
Statistics and trivia 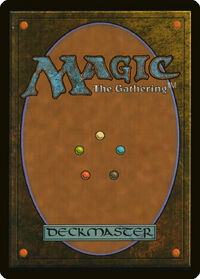 Magic is not a single game but rather a game system that shares a set of rules and game components (mainly cards).[5] It can be played in many different formats.

Within the game of Magic, each player takes the role of a planeswalker, a powerful, magic-wielding being.[6]

The game is commonly played with two players, but can be played with more. Each player uses their own deck, which may be constructed from cards they previously owned, or from a limited pool of cards at an event. There are several ways of winning the game, the most common being reducing your opponent to 0 life, from a starting total of 20.[7][8]

There are currently more than 20,000 unique Magic cards,[9] to which hundreds are added each year. Cards are sold in a variety of languages and products, including booster packs and preconstructed theme decks.

Magic is a game of hidden information, meaning that each player knows secrets that the other players do not.[10][11] By contrast, some other games, such as chess, expose the entire game state to all players. Being forced to guess from imperfect information, combined with the inherent randomness in the game (such as from shuffling), makes finding perfect or ideal strategies impractical, if not impossible, and tests a variety of cognitive skills.[12][13][14][15] This is compounded by the continual addition of new cards, which forces regular reevaluation of deckbuilding and gameplay strategies, and leads to an ever-shifting metagame as players adapt.

Magic is a trading card game, or TCG. While trading cards predate Magic by more than a century, and solitaire games using them date to the 1950s, Magic was the first product to combine randomized, collectible cards with deck-construction and interactive gameplay.[16][17][18]

The colors of Magic[]

Each color has characteristic strategies, mechanics, and philosophies. These properties derive from commonplace associations with the colors themselves, and from the practical considerations of creating good gameplay. The "color pie", or color wheel, is a mnemonic device and creative tool based on the ring of colored dots on the back of Magic cards. For any particular color, the color pie uses adjacency on that ring to split the other colors into a pair of neighboring allied colors and a more distant pair of enemy colors.[19]

Mana is the primary resource for playing spells. Mana is typically drawn from lands (like the basic lands Plains, Island, Swamp, Mountain, and Forest) but it can also be generated by non-land permanents and spells. Players choose whatever cards they want. In order for that to work, the game needs some way to make as many cards as possible matter. By making spells have a cost, the designers are able to make different cards important at different parts of the game. Because of this, each card now has a different reason to be considered for a deck. This diversity of card usage is a key factor in making the entire trading card game work.[20]

A card type is a characteristic that each Magic: The Gathering card has. Each card type has its own rules for how they are played. The main card types are: artifact, creature, enchantment, instant, land, planeswalker and sorcery. Some objects may have more than one card type (e.g., artifact creature). Additionally, cards may have supertypes or subtypes.

The first Magic core set, retroactively labelled Alpha, was created by Dr. Richard Garfield, bought by Wizards of the Coast, and released in August 1993.[21][22] High demand led to a second Beta print run two months later, followed by a rebranded Unlimited Edition. When Richard first made the game, he called it Magic. The name was too basic to trademark so the name was changed to Mana Clash.[23] Everyone kept calling it Magic so they looked into what they needed to do to call it Magic. The answer was to add something to it to make it more unique. Richard chose “The Gathering” as a sub name signifying the beginning, as the plan was to keep changing the sub names. The next version would be called Magic: Ice Age.[24][25] This idea was however quickly abandoned.[26]

Arabian Nights, released December 1993, was the first expansion set, consisting of new cards, rather than reprints. The first "cycle" of thematically linked new releases, now known as a block, began with Ice Age. There are now over seventy expansions, Commander Legends: Battle for Baldur's Gate being the latest.

The full, official rules for Magic change regularly with the release of new products. Most of these changes simply define and enable new mechanics, though major revisions have occurred infrequently, such as the 6th Edition update in 1999 and the Grand Creature Type Update in 2007. Proclamations that a new update will finally "kill" the game are common.[27][28] Despite this, the game has flourished, with repeated statements that the most recent large set has become the best-selling set of all time.[29][30]

Mark Rosewater attributes the game's success, in part, to three core concepts introduced by Richard Garfield at the game's inception: the trading card game, the color wheel, and the mana system.[16][31] Additionally, since 2008, Wizards of the Coast has devoted efforts to acquiring new players.[32] Such efforts include a shift in game design to mitigate complexity creep, structured play opportunities to introduce women players to Magic,[33] and more in-game representation of women[34][35] and minorities.[36][37][38] In spite of these efforts, the percentage of the player base that identifies as female is currently in the mid-twenties, down from 38% in the recent past.[39]

The first major Magic: The Gathering tournament was the 1994 World Championships held at Gen Con '94. It was a single-elimination 512-person Constructed event run over three days of competition.[40]

The winner, Zak Dolan, received a trophy, a number of booster packs from expansions ranging from Arabian Nights to Ice Age, a deck of Magic poker deck, and a T-shirt. In 1995, Brand Manager Skaff Elias suggested that Organized Play needed to take the step to the next level. The idea was to run several tournaments each year that would gather the best players in the world and reward them with cash for their dedication to the game. Players should have something to aspire to. Elias and Mark Rosewater along with others started to work on the concept. On February 16–18, 1996 the first Pro Tour, very briefly called The Black Lotus Pro Tour, was held in New York.[41] The first Pro Tour season included three more Pro Tour events, culminating in the final Pro Tour, the 1995 World Championships, held in Seattle. In the following years, a Pro Tour season (one year) always consisted of five and later six Pro Tours.

The Pro Players Club was a reward system associated with the Pro Tour. Points accumulated during the season determined the players' level in the club, each with different benefits. The highest levels made it possible to make a living as a professional player.

After the successful introduction of MTG Arena in 2018, Wizards of the Coast and Hasbro debuted Magic esports in 2019 and started to refer to the original paper game as "tabletop Magic".[42][43]

By 2020, the future of Magic: the Gathering was questioned by the common players. This was in response to many recently-printed cards being banned because of their high percentage of use warping the meta of nearly all formats, and the dizzying amount of products which were targeted towards the "whales" of the game and priced beyond what the average player could and was willing to spend.[44][45][46]

In 2021, the Universes Beyond-series was announced. This allowed for other IP's introduced into the game.

Effects of the COVID-19 pandemic[]

The COVID-19 outbreak in January 2020 resulted in preventative measures taken in March. A large swath of the Grand Prix event schedule was canceled, and the Players Tour Finals Houston and the May Invitational also were canceled.[47] By April, it was clear that further events were not safely feasible to hold, and Wizards wrote off the entire season as not salvageable.[48]

By May, the future of in-person gatherings was uncertain and likely to remain that way for some time. Wizards of the Coast therefore shifted the 2020 Partial Season competitions from in-person destinations to online events, played remotely through MTG Arena.[49]

In May 2021, Magic Esports announced a return to in-person play post-COVID-19 for the 2022–23 Players Tour Season.[50] Although the digital play was considered to be a lasting part of of the tournament scene, it is deemed to be only part of the equation going forward. As a result, the 2021–22 Players Tour Season was announced to be the last season featuring the MPL and the Rivals League.[50] Pro Players were told that they should no longer consider success in tournament Magic to be a valid career option.[51] Some form of managing invites for large, Pro-Tour equivalent tournaments will be implemented, and the salaries towards the Leagues would be directed into the prize pool, but no system appears to have been developed at this time.[52]

On WeeklyMTG, Blake Rasmussen explained the announcement as an attempt to re-balance where Wizards spends its organized play resources.[53] “For the longest time, [esports] sucked up all of the resources,” he revealed, leading to a top-heavy organized play system that didn’t serve competitive Magic well. He explained that Wizards of the Coast had identified five pillars of play that they wanted to balance, both organized and casual: friendly play, like kitchen table Magic and FNM; aspirational play, liked PTQs and Grand Prix; elite play, like the MPL and Rivals; festivals, like CommandFest; and digital play on MTG Arena and Magic Online.